Martin of Tours, pastor and bishop of the Church, was born into a pagan family in what is now Hungary around the year AD 316. He grew up in Lombardy (a region in Italy) and came to the Christian faith as a young man. He then began a career in the Roman army. But sensing a call to a church vocation, Martin left the military and became a monk, affirming that he was "Christ's soldier." 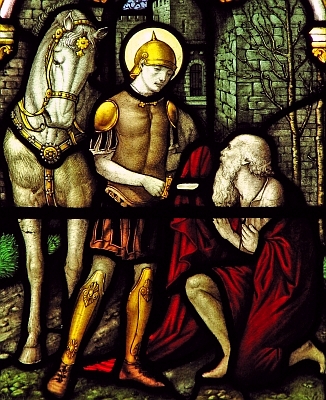 According to early stories, the change came about when Martin was about 21 years old. It was said that he passed the gates of Amiens and saw a man freezing on the side of the road. Taking pity on him, Martin ripped his army issue cloak in half and gave it to the man to help comfort him. That night, Martin dreamt of Jesus Christ wearing that half cloak. This vision shook Martin to the core. No longer wanting to be part of the army, he succeeded in attaining a discharge from service.

Martin journeyed to the city of Poitiers where he met Bishop Hilary. As was not uncommon at the time, even though Martin already considered himself a Christian, he was not yet baptized. Therefore, Hilary administered the sacrament before Martin left Poitiers.

Returning to Gaul, Martin found that the Arian heresy had taken a firm hold. He spoke out against it and was singled out for persecution and forced to flee. The same happened shortly thereafter to Saint Hilary. Martin fled to an island in the Tyrrhenian Sea, living as a hermit. In 361, Martin discovered that Hilary had regained his seat in Pontiers; this news moved Martin to return to Gaul.

Hilary sent Martin to Leguge, a Benedictine monastery, to continue his ways as a hermit; there Martin spent the next ten years. In 371, the Bishop of Tours died and Martin was asked twice to assume that seat — he respectfully refused both times. Martin was tricked into coming to Tours to administer the Anointing of the Sick to a friend's wife. This time Martin was persuaded to accept the responsibility as Bishop of Tours. We remember him for his simple lifestyle and his determination to share the Gospel throughout rural Gaul, as well as his work as bishop in successfully staving off numerous heresies.

Hilary was named as a Doctor of the Church by Pope Pius IX in 1851. However, both he and Martin were already acclaimed as saints by general consensus before any official system of canonization was established.

Over a millennium later, on St. Martin's Day 1483, the one-day-old son of Hans and Margarette Luther was baptized and given the name Martin. Coincidentally, much of the world commemorates the armistice ending World War I and honors veterans on 11 November. Thus we also note that St. Martin is a traditional patron saint of soldiers.

Lord God of hosts, You clothed Your servant Martin the soldier with the spirit of sacrifice and set him as a bishop in Your Church to be a defender of the orthodox, catholic, and apostolic Faith. Give us grace to follow in his holy steps, that at the last we may be found clothed with righteousness in the dwellings of peace; through Jesus Christ our Lord, who lives and reigns with You and the Holy Spirit, one God now and forever.