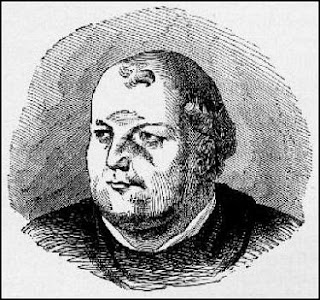 Today we remember Johannes von Staupitz, vicar-general of the Augustinian Order in Germany. He befriended the spiritually troubled Martin Luther on numerous occasions, serving as father confessor for the young monk and sending Luther deeper into the Scriptures while attempting to calm his troubled conscience.

Staupitz was born in Saxony, studied at the universities in Leipzig and Cologne, and served on the faculty at Cologne. In 1503 Frederick the Wise called him to serve as dean of the theological faculty at the newly founded University of Wittenberg. There, Staupitz encouraged Luther to attain a doctorate in theology and appointed him as his successor to professor of Bible.

During Luther's early struggles to understand God's grace, it was Staupitz who counseled Luther to focus on Christ and not on himself. In later years, Luther said, "If it had not been for Dr. Staupitz, I should have sunk in hell."

Staupitz died on 28 December 1524 but the LCMS commemoration was moved away from the Nativity season and linked to this time in November immediately preceding the birthdays of reformers Martin Chemnitz and Luther.

Comments:
What is the original source for the statement attributed to Martin Luther?

"If it had not been for Dr. Staupitz, I should have sunk in hell."