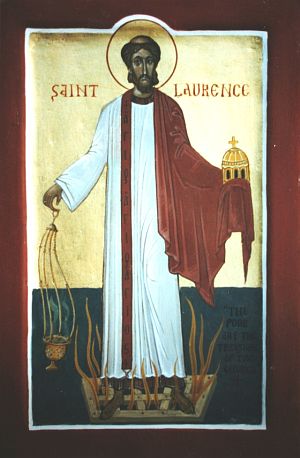 A river, a gulf, and a seaway are named in his honor. A number of Christian congregations and almost anyone known as "Larry" likewise owe their names to this martyr of the ancient Christian Church.

Early in the third century A.D., Lawrence (Latin, Laurentius, also often known as "Lorenz," "Laurence," or "Lorenzo"), who was most likely born in Spain, made his way to Rome. There he was appointed chief of the seven deacons and was given the responsibility to manage church property and finances.

The emperor at the time, thinking that the church had valuable things worth confiscating, ordered Lorenz to produce the "treasures of the church." Saint Lorenz brought before the emperor the poor whose lives had been touched by Christian charity. He was then jailed and eventually executed in the year 258. Many accounts tell of his being roasted on a gridiron until dead. However, some scholars think that this tradition came about due to a faulty transcription and that the phrase assus est (he roasted) should have been rendered passus est (he suffered).

His martyrdom left a deep impression on the young church. Almost immediately, the date of His death, 10 August, became a permanent fixture on the commemorative calendar of the early Church.

Stir up, O merciful Father, Your people to true brotherly affection that we may gladly do good and serve our neighbor, as did Your servant Saint Lawrence, when he emptied the treasure of the Church to help the poor; through our Lord Jesus Christ, who lives and reigns with You and the Holy Spirit, one God, now and forever.