ernard of Clairvaux, a leader in Christian Europe in the first half of the 11th century A.D., is honored in his native France and around the world. Born into a noble Burgundian (Fontaines, near Dijon) family in 1090, he was drawn toward the Church by his own nature and encouraged by his mother's desire. His family opposed His desire to enter a monastery and sent him to study at Châlons in order to qualify him for higher ecclesiastical office. However, Bernard left his affluent heritage, entering the monastery of Citeaux at age 22. He persuaded four of his brothers, an uncle, and 26 other men, mainly the sons of nobles, to join him.

After two years he and several others were sent to a new monastic house at Clairvaux, where Bernard soon became its abbot. His work there was blessed in many ways. The monastery at Clairvaux grew in mission and service, eventually establishing some 68 daughter houses.

During the disputed papal elections between Anacletus II and Innocent II, he took the side of Innocent. From 1130-38, Bernard worked to solidify the papal claim through ecclesiastical and secular politics. He battled against the "New Teaching" espoused by Pierre Abélard at the University of Paris, resisting a broad-based liberal arts education using the philosophy of Aristotle. Instead, Bernard insisted that such an education was only to be used in preparation for the priesthood.

At the command of Pope Eugenius III in 1146, Bernard preached in favor of a new effort to free the Holy Land from the Mohammedans. This gave life to the previously moribund Second Crusade. While the results of the campaign were certainly mixed, events during it served to enhance Bernard's perception among non-Christians: When a monk named Radulf (or Raoul) incited the populace of Mainz against the Jews, Bernard vigorously opposed him, calling the monk arrogant, without authority, a preacher of mad and heretical doctrines, a liar, and a murderer. Radulf slipped away, the riots ended, and Bernard became known as a "righteous gentile." His reputation among Rhine valley Jews remained so good that his name is still given to some of their descendants. The most famous of these would probably be American businessman and presidential advisor Bernard Baruch.

Certainly, we remember St. Bernard for his charity and political abilities. Even more, we honor his preaching ability and, especially, his poetry and hymn writing (cf. NetHymnal and Hymnuts at the Internet Archive): The texts of O Jesus, King Most Wonderful (MIDI audio) and O Sacred Head, Now Wounded (MIDI audio), as well as others, remain vital parts of our Christian heritage. 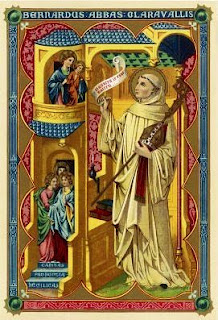 Martin Luther cited Saint Bernard in a number of his writings. When Bernard spoke of justification by grace through faith, Luther commended the teaching. For example, in his commentary on 10, the reformer wrote, "This is the kind of joy and comfort St. Bernard had in his heart, so that he could say, on the basis of this article: 'How can I ever become sad and mournful or discouraged? After all, my flesh and blood sits in heaven above. I expect He will not be my enemy.'﻿﻿ For St. Bernard to apply this to himself and to boast this way is certainly a genuinely spiritual, heavenly, and divine thought, derived from his faith. For he had also amounted to something in the world. He had been rich enough, noble, learned, and holy. But before God St. Bernard knows no other boast or comfort than this Lord. (LW 13:245)"

Where Bernard lapsed into exalting the office of the papacy or waxed eloquent on the merits of the saints — particularly Mary — Luther condemned these works as false and misleading. Yet the reformer appreciated and held close the monk's death-bed confession of personal unworthiness and total reliance on Christ's merits: "That is how St. Bernard was saved. He was an exemplary monk; he observed the rules of his order scrupulously, and he fasted so assiduously that his breath stank and no one could abide his presence. But on the threshold of death he exclaimed: 'Oh, I have lived damnably! But heavenly Father, Thou hast given me Thy Son, who has a twofold claim to heaven: first, from eternity, by reason of the fact that He is Thy Son; secondly, He earned heaven as the Son of man with His suffering, death, and resurrection. And thus He has also given and bestowed heaven on me. [Sermones in cantica, Sermon XX, Patrologia, Series Latina, CLXXXIII, 867]' Thereby St. Bernard dropped out of the monastic role, forsook cowl and tonsure and rules, and turned to Christ; for he knew that Christ conquered death, not for Himself but for us men that all who believe in the Son should not perish but have eternal life. And so St. Bernard was saved. (LW 22:360)"

In case you're wondering, the Saint Bernard dog is not named for Bernard of Clairvaux but indirectly for Bernard of Montjoux (or Menthon), an earlier monk who founded a travelers' hospice and monastery in the Pennine Alps and another hospice in the Graian Alps. Both of these passes were later named for him and and the large rescue dogs for these places where they were stationed.

NB: I followed the LCMS Calendar of Commemorations and listed Bernard on 19 August, even though his death date is normally remembered as 20 August and occasionally as the 21st. Roman Catholicism celebrates his feast on the 20th.

O God, by whose grace Your servant Bernard of Clairvaux, kindled with the flame of Your love, became a burning and a shining light in your Church, grant that we also may be aflame with the spirit of love and discipline, walking before You as children of light; through Jesus Christ our Lord, who lives and reigns with You and the Holy Spirit, one God, now and for ever.

Be Thou my Consolation, My Shield when I must die;
Remind me of Thy Passion When my last hour draws nigh.
Mine eyes shall then behold Thee, Upon Thy cross shall dwell,
My heart by faith enfold Thee. Who dieth thus dies well!
(P. Gerhardt; from Bernard's Salve caput cruentatum)