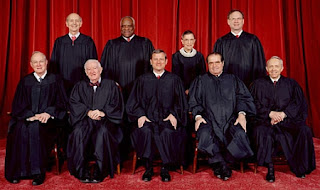 Opponents (and supporters — should any ever read this blog) of abortion would do well to read not only the majority opinion but also Thomas's brief but wider ranging concurrence and Ginsberg's lengthy diatribe against the rule of the court's majority.

Comments:
This is a great day for the pro-life movement. We have Senator Sam Brownback to thank for rejecting the Miers nomination and getting Justice Alito on the court.

The trouble is, some of Ginsburg's arguments make sense. If past precedents are based upon good principles, then there should be no ban on this procedure. It saves the life of no fetus, given that a woman may just seek another type of abortion.

Ginsburg is chilling to read, but I cannot fault her consistency. And I could fault a judge who thought that all abortions but this one should be legal. This is a chip away game, and as such does not make for good law, in terms of consistency.

I look forward to a real victory when better legal principles win. In the meantime, I'm glad that these horrible procedures won't be taking place.