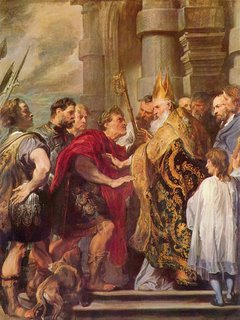 Saint Ambrose of Milan, Bishop and Hymn Writer, was born in Trier around AD 340. He was one of the four Latins among the eight Doctors of the undivided Church (Augustine, Jerome, and Gregory the Great are the West's other representatives; Athanasius, John Chrysostom, Basil the Great, and Gregory of Nazianzus represent the East).

Ambrose was also an author of hymns, the best known of which is probably Intende, qui regis Israel (usually known by its second stanza as Veni, Redemptor gentium). Martin Luther translated it into German (Nun komm, der Heiden Heiland); its English translations (from Luther or the original Latin) usually appear as Savior of the Nations, Come; Savior of the Heathen, Known; or Come, Thou Redeemer of the Earth). His name is also associated with Ambrosian Chant, the style of chanting the ancient liturgy that took hold in the province of Milan.

While serving as a civil governor, Ambrose sought to bring peace among Christians in Milan who were divided into quarreling factions. When a new bishop was to be elected in 374, Ambrose addressed the crowd, and someone cried out, "Ambrose, bishop!" The entire gathering gave their support. At this time, Ambrose was still a catechumen, an unbaptized person still under instruction before joining the church. This acclaim hastened the catechetical process and the 34-year-old was baptized on December 7, after which he was consecrated bishop of Milan.

A strong defender of the faith, Ambrose convinced the Roman emperor Gratian in 379 to forbid the Arian heresy in the West. At Ambrose's urging, Gratian's successor, Theodosius, also publicly opposed Arianism. Because Ambrose died on Good Friday, 4 April 397, the Church was unwilling to honor such a known and popular person on the day remembering the death of Christ. Thus, his feast day was translated from his "heavenly birthday" (or death date) to the date of his baptism and subsequent consecration as bishop.

Ambrose was also instrumental in the conversion of Augustine of Hippo. Some early traditions hold that the hymn Te Deum Laudamus ("We Praise You, O God") was a spontaneous composition by Ambrose, perhaps with Augustine's help, upon the baptism of the latter. While later research holds this to be less likely, some scholars are convinced that he was largely responsible for authorship of the Athanasian Creed (14k PDF).

As a courageous doctor and musician he upheld the truth of God's Word. Once again this Advent-tide, thousands upon thousands of believers will use his hymn to pray for the Second Coming of our Lord:

Savior of the nations, come;
Virgin's Son, here make Thy home!
Marvel now, O heaven and earth,
That the Lord chose such a birth.

Not by human flesh and blood;
By the Spirit of our God
Was the Word of God made flesh,
Woman's offspring, pure and fresh. 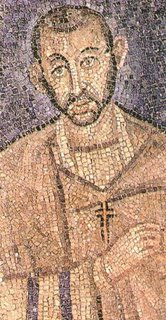 Wondrous birth! O wondrous Child
Of the virgin undefiled!
Though by all the world disowned,
Still to be in heaven enthroned.

From the Father forth He came
And returneth to the same,
Captive leading death and hell
High the song of triumph swell!

Thou, the Father's only Son,
Hast over sin the victory won.
Boundless shall Thy kingdom be;
When shall we its glories see?

Brightly doth Thy manger shine,
Glorious is its light divine.
Let not sin o'ercloud this light;
Ever be our faith thus bright.

O God, who graciously gave Your servant Ambrose eloquence to proclaim Your righteousness and fearlessness to bear reproach for the honor of Your Name, mercifully grant to all pastors and overseers such excellence in preaching and faithfulness in ministering Your Word that Your people may be partakers with them of the glory that shall be revealed; through Jesus Christ our Lord, who lives and reigns with You and the Holy Spirit, one God, now and forever.