When shoddy scholarship intercepts a media frenzy, what else should we expect? A Time article quoted at DVC author Dan Brown's official site, says (without attestation), "Martin Luther believed that Jesus and Magdalene were married, as did Mormon patriarch Brigham Young." A review of the subsequent movie at Entertainment Weekly picked up on the same disinformation, saying, "Surely it can't be proved that Jesus and Mary Magdalene were ever intimate (though Martin Luther believed so)." I'll leave Brigham Young to the Mormons — his beliefs shifted like blowing sand and they're welcome to try figuring out what either Young thought or the current LDS believes about Jesus. [Addendum:Ask the Pastor now has a post on Mormon beliefs about Jesus being married.]

Now back to the comments about Luther. Are they baseless slander? Do they have a germ of truth behind them? Or did Martin Luther actually believe and say such things? Actually, these are not our only choices. I contend that Dan Brown, Time, Entertainment Weekly, et al. (and there are a lot of "al's" involved) misunderstood the Reformer and distorted his words. And as this commemorative post notes, Christendom may have been wrongly maligning Mary Magdalene for centuries before Dan Brown first concocted (or swiped from others) his idea for the novel. It appears from the following quote that Luther never questioned the extrabiblical tradition that Mary had been a prostitute prior to her conversion. 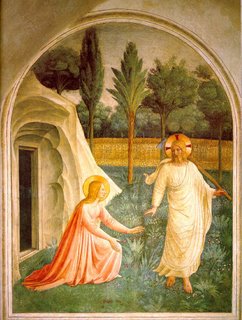 Luther never said Jesus and Mary Magdalene were married. At first glance, his words sound even worse — he actually said of Jesus, "Again [he was an adulterer] with Magdalene." Sitting by themselves, these words might take the wind out of the sails of the staunchest Lutheran.

There is a bit more — Luther actually invoked several women: "Christ was an adulterer for the first time with the woman at the well, for it was said, 'Nobody knows what he's doing with her' [John 4:27]. Again [he was an adulterer] with Magdalene, and still again with the adulterous woman in John 8 [:2-11], whom he let off so easily. So the good Christ had to become an adulterer before he died."

It's too bad that John Schlaginhaufen didn't provide more context when he recorded this quote back in the spring of 1532. Even though he roomed in the Luther household and ate at the table, he didn't always explain what led the reformer make some of his comments. However, there are a few things that we can know from understanding all of Luther's theology and beliefs.

Luther firmly believed that Jesus was the only-begotten Son of God. While he certainly didn't consider sex, of itself, to be sinful, the notion of Jesus engaged in carnal relations outside of marriage — let alone with all the women just mentioned — would never have entered his mind. Indeed, Luther would never even entertain the idea that Jesus would have married the woman from Magdala or anyone else because he properly understood that Christ came to claim and cleanse the Church as His bride (see Ephesians 5:22-32 and Revelation 21).

So what in the world was he talking about at dinner that day in 1532? The Biblical context, Christian theology, and a knowledge of Luther's way of thinking lead us to one or two possible conclusions — and "stupid drunk" isn't one of them. One thing that's clear when we examine the passages and women of whom he spoke is that someone considered each to be a horrible sinner at some time in her life.

Therefore, Luther may have been examining Jesus from the perspective of His First Century witnesses, who were shocked that He ate and drank with "sinners" and that He'd sit and talk one-on-one and in public with a woman. With Luther's frequent invective against gossips, we can easily imagine him paralleling the suspicious minds and wagging tongues of Christ's time with those he knew in 16th Century Germany.

The other logical conclusion the total evidence allows is that Luther was speaking theologically. Talking with, granting forgiveness to, and allowing anointing by these women was emblematic of Jesus' entire earthly ministry. He was no passive bystander of the human condition, but He lived among us. While sinless, He took our sins upon Himself that He might fully forgive us. Paul summarized this work in 2 Corinthians 5:21, saying, "For our sake [God] made him to be sin who knew no sin, so that in him we might become the righteousness of God. (ESV)"

Hanging cursed upon the tree because of our transgressions, Jesus, in the Father's righteous judgment, had become "adulterer" to save sexual sinners. Likewise, He was "murderer" to save the hateful, as well as "oath-breaker," "liar," "sorcerer," and every other type of wicked person, even though He never committed a single one of these sins.

By either of these interpretations — or a combination of both — we may easily allow that Luther connected Jesus and Mary Magdalene through the sin of adultery but not through the blessing of marriage.

Comments:
I don't believe Jesus was married, but I never saw any particular reason why he couldn't have been.

Actually, Paul makes abundantly clear that the primary illustration is spiritual, although the human dimension certainly is included: "This mystery is profound, and I am saying that it refers to Christ and the Church. However, let each one of you love his wife as himself, and let the wife see that she respects her husband. (verses 34-35, emphasis added)"

Many syncretistic religions formed gnosticism. Gnosticism was rivaling against Christianity and gnosticism held itself better religion as Christianity was. Word gnosticism comes from Greek word gnosis, which means knowledge. Gnosticism was various effects, for instance, some Gnostics taught that divinity can be achieved through unity of the man and woman. This thought led some Gnostics to reach for divinity through sexual intercourse between the man and woman. There existed also some Gnostics, who abstained from sexual intercourse. When we know the fact that Gnostics held Christians as their enemies and that Gnostics held themselves better as Christians and that Gnostics wanted to show in every way that Gnosticism was better as Christianity, so Gnostics made so called gnostic gospels were they twisted, slandered and misrepresented the real gospels. Gnostics went so far in this misrepresent that they wrote "new gospels" by faking the real gospels. In these faked gospels Gnostics wrote that Jesus Christ was an ordinary man who has a sexual relationship with Mary Magdalene.