St. Ignatius was the bishop of Antioch in Syria (near contemporary Antakya, Turkey) at the beginning of the second century AD and an early Christian martyr. Antioch was a port on the Orontes River in Syria with access to the Mediterranean Sea, just north of the modern country of Lebanon. Its importance included spice and other valuable trades and it was closely connected to the Silk Road and the Persian Royal Road.

The city was important to early Christianity, especially after the destruction of Jerusalem in AD 70. Followers of Jesus were first called Christians in Antioch (cf. Acts 11:26). Paul began three of his missionary journeys from there. It is believed that Matthew wrote his Gospel in Antioch.

The Didache, the Teaching of the Twelve Apostles, was probably written in Syria and likely in Antioch. The city was one of five patriarchates of early Christianity under Constantine, along with Jerusalem, Constantinople, Alexandria, and Rome. Saint John Chrysostom (AD 349-407), the Bishop of Constantinople, was born in Antioch. The Maronite Eastern Catholic Church of Lebanon originates from Christian Antioch. 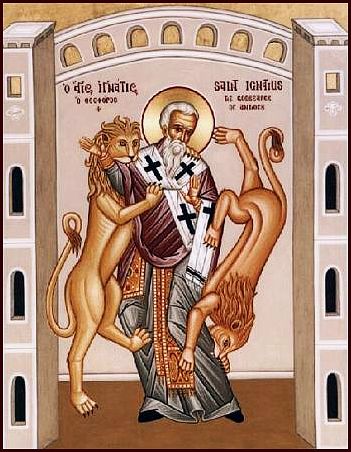 Near the end of the reign of Trajan (98-117), Ignatius refused to worship the Roman emperor. He was arrested, taken in chains to Rome, and eventually thrown to the wild beasts in the arena.

On the way to Rome, he wrote letters to the Christians at Ephesus, Magnesia, Tralles, Rome, Philadelphia, and Smyrna, and also to Polycarp, bishop of Smyrna. In the letters, which are beautifully pastoral in tone, Ignatius warned against certain heresies (false teachings). He also repeatedly stressed the full humanity and deity of Christ, the reality of Christ's bodily presence in the Lord's Supper, the supreme authority of the bishop, and the unity of the Church found in her bishops.

Ignatius was the first to use the word catholic to describe the universality of the Church. His Christ-centeredness, his courage in the face of martyrdom, and his zeal for the truth over against false doctrine remain his lasting legacy to the Church.

For I know and believe that he was in the flesh even after the Resurrection. And when he came to those with Peter he said to them: "Take, handle me and see that I am not a phantom without a body." And they immediately touched him and believed, being mingled both with his flesh and spirit. Therefore they despised even death, and were proved to be above death. And after his Resurrection he ate and drank with them as a being of flesh, although he was united in spirit to the Father. Letter of Ignatius of Antioch to the Smyrnaeans III

I am writing to all the churches and am insisting to everyone that I die for God of my own free will — unless you hinder me. I implore you: do not be unseasonably kind to me. Let me be food for the wild beasts, through whom I can reach God. I am God's wheat, and I am being ground by the teeth of the wild beasts, that I may be found pure bread of Christ. Letter of Ignatius of Antioch to the Romans IV

Almighty God, we praise you for your bishop and martyr Ignatius of Antioch, who offered himself as grain to be ground by the teeth of wild beasts that he might present to you the pure bread of sacrifice. Accept the willing tribute of our lives, and give us a share in the pure and spotless offering of your Son Jesus Christ; who lives and reigns with you and the Holy Spirit, one God, now and forever.