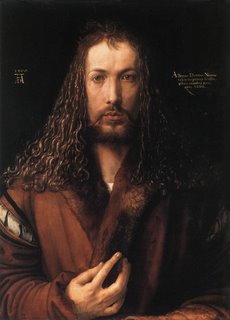 Albrecht Dürer (1471-1528), a native of Nuernberg, Germany, was one of the most learned of Renaissance artists and ranked among the great minds of Humanism. His paintings and woodcuts include examples of the splendor of creation and skilled portrayals of biblical narratives.

While great beauty and form characterize his paintings, most know him best for his woodcuts and etchings, often produced in extended series format. The Concordia Historical Institute displayed two of these series in one show: His "Life of Mary" and "Small Passion" were shown in an exhibit entitled A Sword Will Pierce Your Own Soul Too. CHI made digital copies of the individual works and they may be viewed by following the link.

Dürer never renounced Roman Catholicism, although his later writings and paintings show great sympathy toward the Reformation and ardent admiration for Martin Luther. 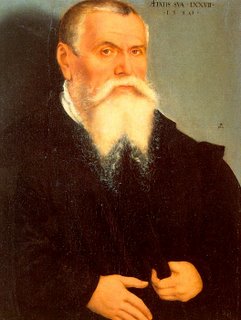 Lucas Cranach (1472-1553), a close friend of Martin Luther, was a celebrated painter of portraits and altar pieces and a producer of woodcuts of religious subjects.

Among his portraits are some of the most noted depictions of Martin and Katy Luther and Luther's co-worker Philipp Melanchthon. He also did a number of works from Greco-Roman mythology, Biblical and hagiographic scenes, and portrayed a number of wealthy people from his time.

Among his most noted works is the altarpiece from Weimar, often thought to have been completed by his son, Lucas Cranach the Younger. The painting depicts Old and New Testament themes centering on Law and Gospel and on the crucifixion and resurrection of Christ. Cranach's intentional anachronism of including himself, Martin Luther, and John the Baptizer at the foot of the cross shows how the Church always points to Christ and benefits from His suffering and death.

Some later scholars have tried to depict Cranach as a misogynist. However, examination of his writings and the content of his paintings allows little credence for this theory.

Both Cranach and Dürer are remembered and honored for the grandeur of their works of art that depict the glory and majesty and the grace and mercy of the triune God. I've also included Michelangelo Buonarroti, although his life (both public and private) sometimes was contrary to Scripture's standards of godliness. 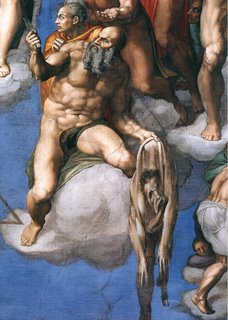 During roughly the same time that Cranach and Dürer worked in Germany, Florentine artist Michelangelo Buonarroti (1475-1564) was busy in Italy. By age 21, he'd already carved his famous Pietà, a scene of the Virgin holding her dead Son before His burial. Most will probably know him from his statue of David and his work in the Sistine Chapel.

The picture here is from his "Last Judgment" fresco; the person portrayed is Saint Bartholomew, holding the knife said to have flayed him in one hand and his peeled skin in the other. I include it because the face of the restored saint is a self-portrait by Michelangelo. Many have speculated as to why he chose this particular person to bear his image. Some think he used it to indict those who criticized him, as if to say, "You can cut away at me now, but I will be vindicated." Others believe that he wrestled throughout his life with temptation and sinful behavior but recognized that in the Resurrection he would be remade.

O God, who by your Holy Spirit give to some the word of wisdom, to others the word of knowledge, and to others the word of faith, we praise You for the gifts of proclaiming Your grace and glory through visual representation that you gave to your servants Albrecht and Lucas [and Michaelangelo], and we pray that Your Church may never be destitute of such gifts; through Jesus Christ our Lord, who lives and reigns with You and the Holy Spirit, one God, now and forever.