Of the many saints recognized by the Christian Church, Nicholas is one of the most widely commemorated. However, very little is known historically of him, although there was a church of Saint Nicholas in Constantinople as early as the sixth century. Research affirms that there was a bishop by the name of Nicholas in the city of Myra in Lycia (part of Turkey today) in the fourth century.

While we don't know a tremendous amount about him, scholars are certain that he was not a "jolly old elf" and that he espoused an austere lifestyle incompatible with "a round little belly" shaking "like a bowl full of jelly."

From that coastal location, legends about Nicholas have traveled across time and distance. He is associated with charitable giving in many countries around the world and is portrayed as the rescuer of sailors, the protector of children, and the friend of people in distress or need. In commemoration of Sinterklaas (a Dutch version of Saint Nicholas), 6 December is a day for giving and receiving gifts in many parts of Europe. 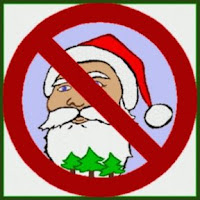 See the article at Ask the Pastor for a famous apocryphal story and related information on his patronage and "transformation" into the American Santa Claus. There you'll learn about his connection with money lending and his status as patron saint for pawnbrokers. Also, Ask the Pastor includes the following St. Nicholas Day hymn stanza as part of a previous year's article on midweek Advent services based upon sanctorial commemorations in the Christian calendar:

With joy Your Church remembers
Saint Nicholas, the blest,
Who gave up earthly treasures
And Jesus' name confessed.
The poor and weak he welcomed,
The heretic he scorned;
Through faith and life and preaching,
Christ's Gospel he adorned.

Meanwhile, Pastor Alex Klages focused on Nicholas as a staunchly orthodox bishop who grew so weary of the arch-heretic of Nicaea that he slapped Arius for continually professing false doctrine concerning the Lord Jesus Christ.

O Lord, let Your continual mercy enkindle in Your Church the unfailing gifts of charity and faith, that, following the example of your servant Nicholas of Myra, we may have grace to deal in generosity and love with children and with all who are poor and distressed, to uphold the cause of those who have no helper, and to strive for purity of doctrine in the Church; for the sake of Him who gave His life for us, Your Son our Savior Jesus Christ, who lives and reigns with You and the Holy Spirit, one God, now and forever.