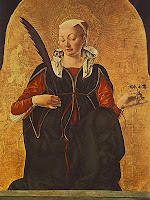 Lucia (also Lucy or Lukia) was one of the victims of the great persecution under the Roman emperor Diocletian. She met her death at Syracuse on the island of Sicily because of her Christian faith. Known for her charity, "Santa Lucia" (as she is called in Italy) gave away her dowry and remained a virgin until her execution by the sword. Some accounts, similar to those surrounding Saint Polycarp, claim that Lucy was first sentenced to be burned and that when this failed, she was stabbed to death.

Various stories are told about her. Some claim that she refused to marry a pagan and was killed; others say that forfeiting her dowry led her unbelieving fiancé to denounce her to the authorities as a Christian. Another account tells us that either during or at a time before her execution, her eyes were gouged out but that God restored her sight.

The name Lucia means "light." Because of that, festivals of light held in her honor became popular throughout Europe, especially in the Scandinavian countries. There, her feast day corresponds with the time of year when there is the least amount of daylight. Under the Julian Calendar, her feast day actually fell on the shortest, darkest day of the year but this connection vanished with adoption of the Gregorian Calendar.

Ecclesiastical art often portrays Saint Lucia holding a palm branch, the traditional sign of victory or martyrdom; a sword may also be shown piercing her breast or throat. Sometimes, as in the pictures above, we see her holding her missing eyes in her hand or on a plate before her.

Another common portrayal has the saint dressed in a white baptismal gown, wearing a wreath of candles upon her head. In many Nordic homes, this attire is mimicked on her feast day. One of the girls or women of a household, often the eldest daughter, wakes early on Lucy's feast day, prepares a special breakfast, dons a headpiece of candles, and moves through the home with the meal honoring the saint.

Lucy's name was applied to various people and places in the centuries following her death. Among the most noted would be the Santa Lucia area of Naples, celebrated in the Neapolitan song Santa Lucia. The tune calls Lucy's namesake area impero dell'armonia (the empire of harmony).

With Lucy, the Church sometimes also honors the virgin martyr Agatha. She came from Catania in Sicily, and was most likely martyred in the late 200s. Aside from her name on the lists of early martyrs, we know nothing of her.

O Almighty God, by whose grace and power Your holy martyr(s) Lucy (and Agatha) triumphed over suffering and was (were) faithful even unto death, grant us, who now remember her (them) with thanksgiving, to be so faithful in our witness to You in this world, that we may receive with her (them) the crown of life; through Jesus Christ our Lord, who lives and reigns with You and the Holy Spirit, one God, forever and ever.

For holy martyr Lucy, Who faced the tyrant's sword
And through her death gave witness, We praise Your name, O Lord.
Your light she showed in darkness; May we thus also shine
Until, our struggles ended, We see Your face divine.

Hymn text © 2006 by Walter P. Snyder. Permission granted for use with proper attestation.