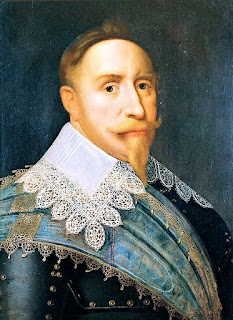 Throughout history, God has raised up and blessed many wise kings, wily generals, and heroic fighting men. In Gustav II Adolf, He did all three — and to that mix He added passionate faith in our Lord Jesus Christ and unswerving confidence that the Lutheran Reformation had restored proper Biblical teaching.

Born on 9 December 1594, Gustav was the oldest son of Charles (Karl) IX of Sweden and his second wife, Christina of Holstein-Gottorp. His grandfather Gustav I was the first of the House of Vasa to reign as King of Sweden. Through his mother, he was descended from German nobility, including Philip I, Landgrave of Hesse, who is remembered both for his support of the Reformation and for his bigamy which caused Luther and the other reformers much grief.

From his earliest childhood, Gustav was immersed in the art of governing. He played in Charles' study while a little boy as his father conducted affairs of state. At six, he accompanied the army on campaign. By the time he was ten, he was allowed to sit at the council table and voice his own opinions. As a teen, he received ambassadors. He knew at least a bit of ten languages, carried a life-long interest in learning, and held a passion for philosophy, especially of a practical nature. As an adult, he was seldom found without a volume of Grotius nearby and while he rejected the philosopher's Arminian theology, he embraced much of his apologetic and his theories on government.

Gustav ascended to the throne in 1611 as a seventeen year old but his claim was challenged by his cousin Sigismund III of Poland. The two engaged in intermittent dynastic struggle which led to open combat in the Polish-Swedish War (1625-29).

When Gustavus Adolphus brought Sweden into the Thirty Years' War, he did so both to defend German Lutheran states from the Catholic forces of the Holy Roman Empire and to extend Sweden's territory and international influence. Living at a time when Cardinal Richelieu was standard-bearer for statecraft, the king out-maneuvered the cardinal and turned French aid into Swedish domestic and military might. And because he strongly espoused both religious and political reasons for Swedish involvement in the affairs of lower Europe, particularly Germany and the Empire, Gustavus Adolphus could appeal to both the faith and the patriotism of his subjects. 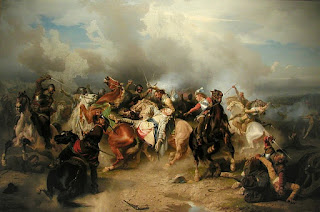 Gustav II customarily placed himself in the midst of combat, not only to inspire his troops but because his tactics often depended upon fast analysis of and reaction to battlefield conditions. However, it was the king's leading from the front that cost him his life. He'd already been wounded in other battles and had adopted what he thought a better suit of armor. At Lützen, during a crucial point in the battle, he led a cavalry charge into the powder smoke and fog. He became separated from his troops and was killed.

After he died, his widow initially kept his body (later only his heart) in the castle of Nyköping for over a year. His remains, including his heart, now rest in Stockholm's Riddarholmskyrkan, the burial site of Swedish monarchs. The German Protestants remembered him as "The Lion of the North" or "Der Löwe von Mitternacht" ("The Lion of Midnight") while the Riksdag named their fallen king "Gustaf Adolf den Store" ("Gustaf Adolph the Great"), a title bestowed on no other Swedish monarch before or since.

We sometimes speak of "winning the battle but losing the war." Lützen approached that level of calamity but the Swedish, Lutheran, and Protestant causes were not completely obliterated. Bernhard of Saxe-Weimar assumed command and completed the victory. Still, Gustavus Adolphus' death meant that France would assume a leading role among the anti-Hapsburg forces. The Lutherans would lose some territory but the gains of the Reformation would not be completely undone. And Sweden would still have some influence in European politics for years to come, although not to the degree enjoyed under their greatest king.

Although born after that historical era ended, Gustav II Adolf was a prototypical Renaissance man. He was well-versed in the Bible and in other literature. He understood both the art of war and the art of peace. A staunch aristocrat and monarch, he was able to keep his nobles in check and give them true ownership in Sweden's government. At the same time, he could also inspire the allegiance of the common people. Military historians and strategists often herald Gustavus Adolphus as the father of modern war. Later military geniuses, including Napoleon Bonaparte and Carl von Clausewitz, consider him as one of history's greatest generals, a thought continued in more modern times by George S. Patton and others.

Gustavus Adolphus pioneered the use of fast-firing musketeers and extreme mobility of troops and flexibility in engagements. His artillery was much more mobile than others' and he treated all branches of his army equally, refusing to favor cavalry over infantry or musketeers over pikemen. Indeed, he cross-trained as many of his soldiers as possible, so much of his infantry could ride and his pikemen could also use muskets.

Yet we Christians, in particular we Lutherans, most of all remember and give thanks for a man who used his intellect and leadership in political and military defense of the religious gains of the Reformation. And while not all in Sweden, Germany, or elsewhere continue to staunchly believe in justification by grace through faith, or to trust in Scripture's veracity and the truth of the Lutheran Confessions, it's nowhere the fault of godly King Gustavus Adolphus Magnus.

See also the biographical information at Wikipedia, Three Hierarchies, Biography Base, and eDigg.

*At the time of Gustavus Adolphus' death, Sweden still used the Julian Calendar. The nation kept the traditional death date for their most revered monarch rather than moving it to 16 November on the Gregorian Calendar.

Almighty and everlasting God, who kindled the flame of Your love in the heart of Gustav Adolf, who inspired his kingship under Jesus, the King of kings, and who led him to bold confession and humble service, grant to us, Your people, like faith and humble service, that we who rejoice in his triumphs may profit by his example; through Jesus Christ our Lord, who lives and reigns with You and the Holy Spirit, one God, now and forever.  ¶ 00:01 | 0 comments |