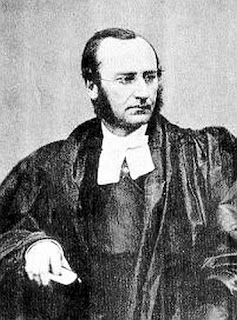 In 1839, Krauth graduated from Pennsylvania (now Gettysburg) College. His father was the college's president at this time and also served on the theological faculty of the city's Lutheran Theological Seminary, so it's no surprise that young C. P. Krauth attended this school for his pastoral education. He graduated in 1841 and was ordained the following year, after which he served as parish pastor in Baltimore, the Shenandoah Valley, St. Thomas, Virgin Islands, and Pittsburgh, Pennsylvania.

Krauth was called to St. Mark's Church, Philidelphia in 1859 and served there for two years. However, his dissatisfaction with American Lutheranism led him to resign and assume editorship of the Lutheran and Missionary, a journal espousing a return to the theology of the Augsburg Confession. His movement away from his father's church seems to have been triggered by ... his own father! This wasn't the result of family strife but because Charles James Krauth had given Charles Porterfield Krauth the gift of Chemnitz.

The more he read from "the Second Martin," the more he was convinced that the General Synod and most of Americanized Lutheranism had departed the ways of "the First Martin"; i.e., Luther himself. C. P. Krauth became increasingly uncomfortable with Lutherans who were so concerned with ecumenism that they would downplay, abandon, or deny the theology of the Augsburg Confession and the rest of the Book of Concord. He recognized the strains of "Socinianism ... Universalism ... Unionism, Pietism, Moravianism, and Methodism"* and other non-Lutheran, even unchristian, philosopies and theologies that diluted and corrupted pure Evangelical Lutheranism away from what he was ever-increasingly growing to know, to believe, and to love.

As he ventured farther into the "old" Lutheranism of the Reformation and the Age of Orthodoxy, Krauth started speaking more harshly about the "new" Lutheran leaders who were following the lead of Samuel Simon Schmucker. He claimed that the General Synod had become the playground of "moral weaklings." These "amiable inanities" only played at "neutrality and conservatism," ignored major theological differences, and generally espoused a healing through "a cataplasm of soft words and soft soap, or an ointment of love and lard."† Needless to say, the other side hated these criticisms and the cracks between their conflicting confessions quickly expanded to a major rift.

This new conservative and confessional wing of English-speaking American Lutheranism found itself needing its own organization and theological institutions. The confessional party established Lutheran Theological Seminary, Philadelphia in 1864 and asked Krauth to lead their new school and become its professor of systematic theology. In 1867, Krauth was instrumental in the establishment of the General Council of the Evangelical Lutheran Church in North America. He wrote the General Council's position papers and the foundational document and then drafted its constitution. Three years later, he was elected the Council's president, in which office he served for a decade, until 1880. 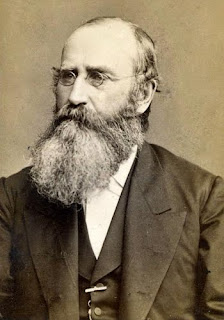 Krauth composed a series of theses on pulpit and altar fellowship under the title the “Akron-Galesburg Rule.” The summary is simple: "Lutheran pulpits only for Lutheran pastors, and Lutheran altars only for Lutheran communicants only." While the Galesburg Rule permitted exceptions based on pastoral discretion, it still strongly repudiated the nearly blind ecumenism of the General Synod.

Krauth's theological arguments and personal appeal stood him in good stead. Over the course of time, both his own father and Beale Melanchthon Schmucker (Samuel Simon's grandson) joined him in a literal reading of the Scriptures and a quia adherence to the Lutheran Confessions. He also drew William Passavant, the pioneer of the American Lutheran deaconess movement, into the confessional camp.

Krauth's scholarship and academic influence went beyond Lutheranism. He became a trustee of the University of Pennsylvania, serving from 1865 to 1868. He was made Professor of Intellectual and Moral Philosophy in 1868 and held that position until his death in 1883. From 1873-1882, he was also Penn's Vice Provost.

Over the course of his life, Charles Porterfield Krauth saw more than one hundred of his works in print. Chief among these was The Conservative Reformation and Its Theology: As Represented in the Augsburg Confession, and in the History and Literature of the Evangelical Lutheran Church (1875). His reputation as one of the great American Lutheran theologians remains secure. In fact, we might drop the "American" and name him as one of the great theologians throughout all Lutheranism.

Pastor David Jay Webber leads us to think thusly, claiming that if C. F. W. Walther justly deserves the title, of "the American Luther," then Krauth is the best candidate for "the American Chemnitz."†† Walther himself noted a Chemnitz-like mix of confessional theology and a conciliar nature in calling Krauth "the most eminent man in the English Lutheran Church of this country, a man of rare learning, at home no less in the old than in modern theology, and, what is of greatest import, whole-heartedly devoted to the pure doctrine of our Church, as he had learned to understand it, a noble man and without guile."†††

Finally, a few notes on his family: C. P. Krauth was married to Susan Reynolds from 1844 until her death in 1853. In 1855, he married Virginia Baker. He was blessed with five children through his two wives.

*Commemoration moved from 2 January (the LCMS calendar's remembrance of Wilhelm Loehe) to today. His birth date of 17 March conflicts with the commemoration of Saint Pádraig.

O Lord God, heavenly Father, we pray that, as You raised up Charles Porterfield Krauth to lead Lutherans in American into a renewed appreciation of their confessional heritage and to a fuller confidence in the saving Gospel of Jesus Christ, so You would continue to provide us with faithful pastors and leaders, keep us steadfast in Your grace and truth, defend us against all enemies of Your Word, and bestow on Christ's Church Militant Your saving peace; through Jesus Christ, Your Son, our Lord, who lives and reigns with You and the Holy Spirit, one God, now and forever.  ¶ 00:01 | 0 comments |