15 January 2009
Gran Torino: A Semi-theological Review The Aardvarks Give It Two Thumbs Up 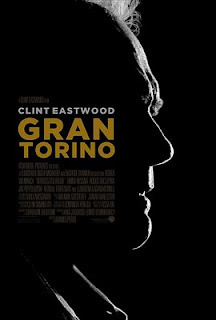 Mrs. Vark and I ventured out of the burrow, lured by trailers for Gran Torino, Clint Eastwood's new film. I watched it "four-eyed," focusing the eyes of a hopeful movie-goer through the lenses of Lutheran theology. By movie's end, both the theologian and the film fan were certain they'd gotten their money's worth.

By now, most anyone visiting the Alley has at least experienced some of Gran Torino's advertising. That means that if you haven't seen it, at least you've probably drawn certain conclusions and made some educated guesses concerning the plot. If you're like the Mrs. and me, you're probably partially right but also wrong in some important areas.

Without giving away any big surprises, I'll provide a very brief synopsis. We meet protagonist Walt Kowalski in present day Detroit. We join him in the middle of his wife's funeral mass. Before leaving the funeral and the following "dead spread," we have a pretty good idea about most of the major characters' personalities. What unfolds is part morality story, part (tragi-) comedy of errors, part character study, and part affirmation of the Cardinal Virtues, intertwined with faint tendrils extended from the Theological Virtues. Feel free to read on — I'll warn you before tipping you to any minor spoilers.

Who should see it? Pastors. Particularly newer ones, plus any of us who've been around for a while who might need a primer on life and death, on living and dying. Well, that includes most of us.

Who else? Younger people, particularly those who think that life or family owe them something. Teens who struggle with the 4th Commandment. Moms and dads, especially parents unsure about raising their children in the Lord's "fear and instruction (Ephesians 6:4)."

Any others? Folks wrestling with guilt. People who think that pastors don't have a clue how "real people" think and live. Those who are hung up in racial and ethnic stereotyping. Men and women who can't handle change. Anyone who desires change solely for change's sake. Married people who need to be reminded how important and precious is that person who shares bed, home, hearth and heart. And probably a lot more folks.

Who shouldn't see it? Those who absolutely can't get through the salty language. It exceeds Tropic Thunder for gratuitous racist comments and while the Lord's name is actually held somewhat sacred by Hollywood standards, F-bombs, crude jokes, and/or other obscene fireworks light up almost everyone's speech at some time or another. Yet it never seems gratuitous; from my experiences in similar neighborhoods in various parts of the country, including Michigan, I imagine that the area of Detroit portrayed won't sue for defamation of character.

What about taking your family? It depends in part upon the age of your children. Now that I've seen it, I wish we'd taken our 16 year old with us. Besides church backgrounds or ethnicity, the Aardchild probably has more in common (in a good way) with Thao and Sue than with Walt's grandchildren. You'll need to evaluate your child(ren)'s maturity and balance your conclusions against a few intense and violent moments, a rape committed off-camera, and the aforementioned language.

Before you read on, I think I've vetted this for major spoilers. Still, if you're not sure, see it first and then come back and compare with what follows. However, if you haven't seen it but have seen previews in theaters, on the tube, or online, you're probably not going to learn anything factual from the rest of this review. Even if you've already guessed where much of the film and many of its characters end up, actually seeing Gran Torino will change your thinking about its whys and wherefores. Maybe that's part of the point: The means employed and the roads traveled matter as much as do the ends of each character arc.

I thought it interesting that some critics call Walt Kowalski an antihero. I disagree. The Man with No Name and Harold Francis "Dirty Harry" Callahan were among the antiheroes Clint played. Walt isn't one of them. He may move through film's early scenes in that mode, but by the time the end credits run and the first rough-voiced vocalist begins to sing, he's been forged into someone truly heroic. Or maybe he's been "anti-forged," since the process is unusual for those our society calls its heroes. He rang true enough that I could even forgive the one rather obvious, almost heavy-handed, Messianic reference near the end.

I advise paying extremely close attention to the quiet segments. Some of the best quotes are barely audible, but they aren't throw-aways. Too bad the Lutherans only got one line.

Anyway, in some ways, we could use a few more pastors who grow into the office in the manner of Fr. Janovich. At the same time, Walt could have used a priest who had a better grasp of Law and Gospel but then, who among us living in this fallen Creation wouldn't benefit from even better spiritual leadership than we now receive?

Virtually every actor in Gran Torino, from Clint to the dog, from the wimpy Trey to the stern grandma, is money during every second of screen time. The casting department certainly contributed but it was the actors themselves and especially Eastwood the director who made each person so real, not just a collection of cut-and-paste stereotypes. Everything else fits, too ... the cars, the clothes, the Hmong gang-banger rap.

Gran Torino relates a classic saga of sin and redemption. Probably, when you're done watching it, you'll better understand why Rome invented Penance. It seems that they knew psychology centuries before it was invented. God willing, you'll also gain appreciation for Luther and the Reformation restoring penitence to Confession instead of yoking penance to Absolution.

Comments:
Clint Eastwood used his outward crankiness to come across as tough and yet also heroic at the same time, well done i'd say

I finally got around to seeing Grand Torino, and it got 2 thumbs up from my wife and me. I wish the Lutherans had gotten more play, because the line is accurate. As a result, there are a lot of Lutheran Hmongs in Milwaukee, including some who go to Milwaukee Lutheran High School to avoid just the sort of problems that these kids experienced. It would have been nice to see some of them going to the Lord's supper instead of having a shaman sacrifice a chicken, but maybe it wouldn't have driven Clint's plot line along as well.