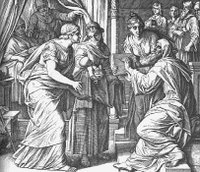 This day celebrates the birth of a son to the elderly and previously childless couple Elizabeth and Zechariah the priest. On the eighth day, his parents would name him John ("Yahweh is gracious").

Saint John would grow up to be the last prophet of the Old Testament and the Forerunner of the coming Messiah, his younger cousin Jesus. Notice that today's date is six months before Christmas — the Nativity of Our Lord — since the Annunciation to Saint Mary came "in the sixth month" of Elizabeth's pregnancy.

The Christian Church remembers Saint John the Baptizer's prophetic ministry and commemorates his death on 29 August.

Almighty God, through John the Baptist, the forerunner of Christ, You once proclaimed salvation; now grant that we may know this salvation and serve You in holiness and righteousness all the days of our life; through Jesus Christ, Your Son, who lives and reigns with You and the Holy Spirit, one God, now and forever.

Yeah, I know, it's been quite a while. Still, the volume isn't that high. (Could the supply of potential Confessional Lutheran bloggers be exhausted?) Anyhow, the time is ripe to address changes to the Big Blogroll O' Vark®™© — this time involving additions and updates.

If you're not sure what to make of the BBOV or wonder about the benefits of being listed and of listing others' blogs, please read the first three links under Aurous Effluence in the sidebar. Those who'd like the Big Blogroll O' Vark®™© can either email me or copy the list from the Alley's source code (click View | Page Source or Control+U in Firefox or View | Source in Internet Explorer).

§  AC 24: News from the Counter-Pietism Unit
§  The Anonymous Lutheran
§  Beholding the Lamb of God
§  The Heart of a Pastor
§  LSI Blog: Lutheran Science Institute
§  The Name of the Lord
§  Share Unit
§  Stand Firm

For these and all others enrolled in the BBOV, links back are certainly appreciated. And don't forget that all of those listed benefit when you use the entire blogroll. Also, if you'd like to graphically point to the Alley and the Big Blogroll O' Vark®™©, you may use the above design from St. Charles Place (created before St. Charles left our midst) or one of these blog buttons:

Each of these buttons measures 80x15 pixels. Should you choose to use one, please link back to either the main Aardvark Alley URL or else to the post What Is the BBOV.

Finally, if you own or know of a Lutheran blog demonstrating a quia confessional subscription and would like me to consider it for inclusion, please leave a comment. And again, for more information about why this stuff benefits confessional Lutheran blogging, morality, and other worthwhile endeavors, please check out the first three links under Aurous Effluence in the sidebar. The Boston Celtics have claimed their 17th NBA Championship and I am finally returning (at least slowly and grudgingly) from the land of Hiatus. And lest you think of me as a Johnnie Come Lately, I started cheering for the Celts years ago. Not during the Bird Era but back when Hondo roamed Boston Garden.

The Christian Church's First Ecumenical Council was convened in Nicaea (modern Isnuk, Turkey) in the early summer of AD 325 by the Roman Emperor Constantine. The emperor presided at the opening of the council. The major intended topic was the ongoing Arian controversy.

The council ruled against the Arians, who taught that Jesus was not the eternal Son of God but was created by the Father and was called Son of God because of his righteousness. The chief opponents of the Arians were Alexander, bishop of Alexandria, and his deacon, Athanasius. The council confessed the eternal divinity of Jesus and adopted the earliest version of the Nicene Creed, which in its entirety was adopted at the Council of Constantinople in 381.

Other topics included celebration of the Resurrection and how the date for Easter would correspond with Passover, the Miletian schism, validity of baptism by heretics, and the restoration lapsed Christians who renounced the Faith under persecution. The Council also established a number of new canons (Church laws). Enumeration varies, but twenty is the number suggested by the editors of the Early Church Fathers:

1. prohibition of self-castration, as done by Origen;
2. establishment of a minimum term for catechumens;
3. prohibition of the presence in the house of a cleric of a younger woman who might bring him under suspicion;
4. ordination of a bishop in the presence of at least three provincial bishops and confirmation by the metropolitan;
5. provision for two provincial synods to be held annually;
6. exceptional authority acknowledged for the bishops of Alexandria and Rome, for their respective regions;
7. recognition of the honorary rights of the see of Jerusalem;
8. provision for agreement with the Novatianists;
9-14. provision for mild procedure against the lapsed during the persecution under Licinius;
15-16. prohibition of the removal of priests;
17. prohibition of usury among the clergy;
18. precedence of bishops and presbyters before deacons in receiving Holy Communion, the Eucharist;
19. declaration of the invalidity of baptism by Paulian heretics;
20. prohibition of kneeling during the liturgy, on Sundays and in the fifty days of Eastertide.
(Summary from Wikipedia.)

Their version of what we now call the Nicene Creed was almost identical to what is now used in the Church until the third section, where the original ends, "We believe in the Holy Spirit." It fell to the Second Ecumenical Council (First Council of Constantinople) to add what is now used. Therefore, the confession used in the churches may properly be called the Niceno-Constantinopolitan Creed. The so-called filioque (where "and the Son" was inserted after the words about the Spirit proceeding from the Father) was only later added by the Roman Catholic Church and never accepted in the East.

The Council also saw the first major collaboration between Church and state since Christianity began and signaled a rise in imperial influence in affairs of the Church. Constantine called it, presided over the initial session, and, in many respects, set its agenda. While his personal religious beliefs may have been part of his reason, most scholars agree that his main fear was that a divided Christianity would result in a divided Empire. The historical irony is that the Roman Empire fractured before any major schisms in Christendom.

I believe in one God, the Father Almighty, Maker of heaven and earth and of all things visible and invisible.

And in one Lord Jesus Christ, the only-begotten Son of God, begotten of His Father before all worlds, God of God, Light of Light, very God of very God, begotten, not made, being of one substance with the Father, by whom all things were made; who for us men and for our salvation came down from heaven and was incarnate by the Holy Spirit of the virgin Mary and was made man; and was crucified also for us under Pontius Pilate. He suffered, and was buried. And the third day He rose again according to the Scriptures and ascended into heaven and sits at the right hand of the Father. And He will come again with glory to judge both the living and the dead, whose kingdom will have no end.

And I believe in the Holy Spirit, the Lord and Giver of Life, who proceeds from the Father and the Son, who with the Father and the Son together is worshiped and glorified, who spoke by the prophets. And I believe in one holy Christian [catholic] and apostolic Church, I acknowledge one Baptism for the remission of sins, and I look for the resurrection of the dead and the life ✠ of the world to come. Amen.