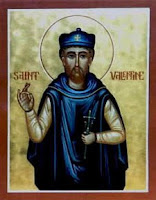 Details of ancient Christianity are sketchy since for much of the Church's early years, it was a crime to be a Christian and records were hidden or kept purposely incomplete to protect believers. Thus, the story of Saint Valentine, as well as those of many others ancient believers, must be pieced together from fragmentary evidence.

Some ancient accounts record a physician and priest living in Rome during the rule of the Emperor Claudius II. This Valentine become one of the noted martyrs of the third century. It seems that his main "crime" was joining couples in marriage. Specifically, Valentine married Roman soldiers. Evidently, Claudius thought that single men made better soldiers while Valentine and the Church resisted the immorality of less-permanent relationships.

The commemoration of his death, thought to have occurred during the year 270, became part of the calendar of remembrance in the early Western Church. Tradition suggests that on the day of his execution for his Christian faith, he left a note of encouragement for a child of his jailer. The note was written on an irregularly-shaped piece of paper which suggested the shape of a heart. This greeting became a pattern for millions of written expressions of love and caring that now are the highlight of Valentine's Day in many nations.

Almighty and everlasting God, who kindled the flame of your love in the heart of your holy martyr Valentine, grant to us, your humble servants, a like faith and power of love, that we who rejoice in his triumph may profit by his example; through Jesus Christ our Lord, who lives and reigns with you and the Holy Spirit, one God, now and forever.