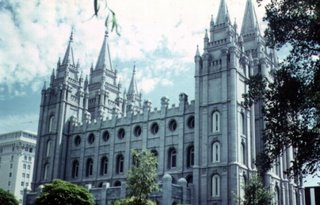 There was a time when I lived in "Mormon country," in the American Southwest. Even though I went to school with a number of LDS children, I knew little about their beliefs or history. I knew even less about how to talk with Mormons about salvation through Jesus Christ, the heavenly Father's love for them, or what the Gospel of the forgiveness of sins truly means. The phrase "Gospel ordinances" sounded a discordant note, but I never fully grasped what it meant in the lives of my Mormon school mates and friends.

In other words, I wish I'd known then what I know now about how to communicate Christian truth in love to Latter-day Saints. Fast forward a bunch of years and we see that "Mormon country" kept expanding. The number of temples and lesser LDS buildings and missions have greatly increased. On the Christian side, you have countless sites — created by both ex-Mormons and "Gentiles" — who don't want to see their Mormon friends, neighbors, and family members spend an eternity in the outer darkness. The trouble is, some of these sites are fairly good while others either beat up on the Saints without mercy or else confound faith and works so badly that their ultimate message is hardly different from that of Mormonism.

Now, if you're familiar with the terminology of the Church of Jesus Christ of Latter-day Saints, you've noticed that I'm somewhat guilty of "keyword stuffing." If you didn't notice, you're either not LDS or you're a Mormon in name only. The LDS definitions of Jesus Christ, heavenly father, salvation, forgiveness, and Gospel all vary significantly from those used by orthodox Christianity. This means that when Mormons and Christians talk, we often find ourselves agreeing with each other because each of us means something quite different.

I used some of these terms to show Christians that we have our work cut out for us. I also did so to invite Mormon web surfers to read this post and, with God's guidance, visit some sites where people who both care about Mormons and understand the differences between LDS doctrine and true Christian theology are ready to talk with you — not at you or about you.

If you're a member of the LDS, someone considering becoming a Mormon, or a Christian who wants to talk about your faith with Mormons, I have a few suggestions. We need to understand each other in conversation. We need to agree what God really said. We need to focus on what people in our churches actually think and not resort to mindless stereotyping.

Some of the best recent material for defining terms and learning to effectively confess the Christian Faith to Mormons comes from those who live and work among the LDS. Of these, I value the efforts of Pastor Mark Cares of the Wisconsin Evangelical Lutheran Synod and those who work with him above anything else I've seen.

The newest large-scale effort to reach out to members of the LDS is at The City of Zion. This cyber community is steeped in language and imagery familiar to Mormons. It consists of a number of "buildings," each of which focuses on specific points of Mormon doctrine and practice. The city will be under construction for some time. As the front page notes, "It takes two to three months of effort to develop the content required to open one building." So far, Zion Gate, the Visitor's Center, the Post Office, the Temple, the Family History Center, and the Gem Shop are open. If you are either a Mormon or a Gentile visitor and find anything you think should be working but isn't, or if you have more questions, they're prompt at answering you from the feedback link at the Post Office.

The City of Zion has a couple of established companion sites. Truth in Love to Mormons is largely based upon Pastor Cares' excellent book and companion video, Speaking the Truth in Love to Mormons. It features a wealth of downloadable material that can be used in Bible classes and for preparation to actually witness Biblical Christianity to Mormons. Truth in Love Ministry functions as sort of a "parent" site, where various aspects of this special work among the LDS, including contact information, the rationale for the ministry, and means of support, are addressed.

Comments:
Apon reading your article, I went to the City of Zion and then to the Truth in Love to Mormons sites. But somethin struck me, both were created by an ex-mormon . . . does that make them volatile by nature? Them seem to condemn all Mormons to Hell, I thought the sites would offer help in understanding them and how to get along with their beliefs, not show how "wrong" and silly they are in their deepest convictions. Being a Mormon myself, I felt more like I was a child being scrutinized then a fellow human being. I would like to know more about how the world views us and I would llike to know how to better communicate with my friends of other faiths without attacking them. Please respond, I am not here to debate, only here to offer you a chance to see how this doctrine might affect Mormons you meet.