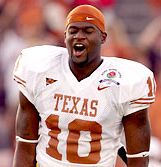 It wasn't one of his many completions. Nor did one of his dazzling runs convince me that the University of Texas Longhorns were going to win the Rose Bowl. It wasn't a picture of him rallying the troops or getting in someone's face. No, something else made me sure.

On the last Texas possession, Vince Young stood in the team huddle with at third down and five inside the Trojan ten yard line and smiled. He wasn't looking at anyone in particular. It wasn't the smirk of a knowing show-off, nor was it forced and artificial. Vince Young just looked like he was thoroughly enjoying himself. Even when that third-down play went for naught, I had no doubt. Vince would get at least the first down and if the Horns didn't score then, they would.

Few people live in the moment as Vince did that night. That ABC camera brought the moment into my house and into my mind. It brought back memories of Larry Bird or Michael Jordan in their primes: Like an elite basketball player knowing he would take and make the game-winning shot, Vince just knew he would get the job done.

Comments:
Coach Bilichick's father used to look at the ankles of football players and was able to figure out what position they would be good at (his son was a center because he has "blocky ankles") Vince Young has slim ankles and he is fast... I'm still awed at what I saw the other day. It is my sincere hope that Young sticks around for another year (doubtful) @ Texas.