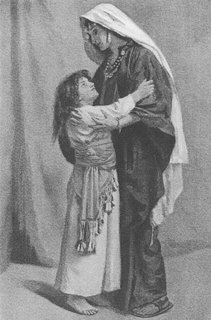 Hannah was the favored wife of Elkanah the Ephraimite. For many years she remained barren, suffering the insults of Elkanah's other wife, Peninnah — even though he said what he could to try comforting Hannah.

Finally the Lord relieved her of her bitterness (1 Samuel 1:6-8). After she poured herself out in prayer before the Tabernacle, the priest Eli sent her on the way with the promise that the Lord would hear and answer her prayer.

While Scripture gives no indication that Eli even knew the specifics of her petitions, his promise to the distraught woman came to pass and she bore a son, whom she named Samuel ("Heard by God"), "for she said, 'I have asked for him from the Lord.' (vv. 9-21)"

After weaning him, Hannah expressed gratitude by returning Samuel for a life of service in the House of the Lord with Elkanah's consent and blessing (1:24-28). Her prayer of thanksgiving (2:1-10) foreshadows the Magnificat, the Song of Mary which would be sung centuries later during the Visitation to her cousin Elizabeth (Luke 1:46-55).

The name Hannah comes from the Hebrew word for "grace" or "favor," the same root as the name John. We remember Hannah for joyfully keeping the vow she made before her son's birth. We also praise our God who lavished His favor upon a childless woman and upon the Children of Israel — both through the gift of Samuel.