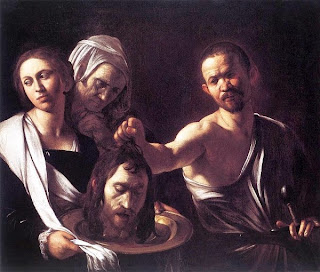 According to the structure of the Christian calendar, the feast commemorating the death of St. John the Baptist comes only two months after the celebration of his nativity. His birth is observed by the liturgical color of white, standard for the principal Christological feasts since, as the Forerunner, John prepared the way for the coming Messiah. This day, however, is colored red, emblematic of the blood of the martyrs.

While all four Gospels mention John, only the three Synoptics tell of his beheading at the command of Herod Antipas. These accounts tell us that Herod imprisoned John because he strongly rebuked the king for divorcing his wife Phasaelis and then entering into an unlawful marriage with Herodias, who had been married to Herod Antipas's brother Philip I.

Mark makes it clear that Herodias held a stronger grudge than her new husband: "Herod feared John, knowing that he was a righteous and holy man, and he kept him safe. When he heard him, he was greatly perplexed, and yet he heard him gladly. (6:20)" However, when Herodias's daughter (traditionally named Salome*) danced for the king on his birthday, Herod was so pleased that he foolishly promised to give her anything she wanted, up to half of his kingdom. Her mother told her to ask for the head of John the Baptist on a platter. Although Herod was "exceedingly sorry" at her request, he reluctantly agreed "because of his oaths and his guests. (6:27)"

Herod had John beheaded in the prison. The executioner then placed the head on a platter and delivered it to the girl, who passed it on to her mother. John's followers then came and asked for his body, which they buried before going to tell Jesus. It was at least in part Jesus' sorrow over the death of John that led him to leave the crowds in Galilee: "He withdrew from there in a boat to a desolate place by himself. (Matthew 14:13)" However, the crowds followed Him, leading him to show compassion by healing the sick and then feeding the crowd of "five thousand men, besides women and children. (14:21)"

While Scripture is silent, some ancient traditions say that Herodius had John's head buried in a dung heap. These accounts claim that Joanna, wife of Herod's steward and a follower of Jesus, later retrieved the head and reburied it on the Mount of Olives. Later stories tell of three separate findings of his severed head. The first two later led to it being lost again for extended periods of time after being hidden. The third purported finding came in AD 850 and led to the head being transferred to a court church in Constantinople.

Jewish historian Flavius Josephus also tells of Herod's beheading of John the Baptist in his Jewish Antiquities. However, the reason he gives is different. Josephus wrote that the king killed John "lest the great influence John had over the people might put it into [John's] power and inclination to raise a rebellion, (for they seemed ready to do any thing he should advise), [so Herod] thought it best [to put] him to death." Josephus also said that many Jews believed that Aretas (Herod's father-in-law) dealt Herod a severe military defeat as divine punishment for his wickedness.

While not the first regularly observed Christian feast honoring a saint, the commemoration of the Martyrdom of John the Baptist is one of the earliest. It has been observed in both the Eastern and Western Church nearly as long as the celebration of his Nativity. Because of the differences in calendars, much of the East celebrates on the same date, but a different day. Also, many devout Eastern Christians remember keep John's feast by refusing to use a knife, eat from a flat plate, or eat any food that is round.

* Josephus wrote extensively on the entire Herodian family. It is from the Antiquities that we are fairly sure that Salome was, indeed, the girl who danced and who asked for the Baptist's head. Ironically, the root of her name in Hebrew is "shalom" (שלם), that is, "peace."

Almighty God, You gave Your servant John the Baptist to be the forerunner of Your Son, Jesus Christ, in both his preaching of repentance and his innocent death. Grant that we, who have died and risen with Christ in Holy Baptism, may daily repent of our sins, patiently suffer for the sake of the truth, and fearlessly bear witness to His victory over death; through the same Jesus Christ, our Lord, who lives and reigns with You and the Holy Spirit, one God, now and forever.