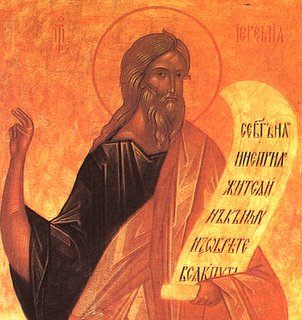 Jeremiah also is credited by many as the author of the book of Lamentations. The book consists of five separate poems, of which the first four are acrostics consisting of verses whose first words begin with successive letters of the Hebrew alphabet. In English translations, of course, this style completely disappears.

Chapter 3 is an especially well-developed acrostic. There are twenty-two letters in Hebrew and the other chapters have 22 verses. However, this chapter has sixty-six, grouping sets of three verses under each letter of the alphabet. Thus, verses one through three begin with א (aleph), verses four through six with ב (beth), seven through nine with ג (gimel), and so-on down the line. Chapter Five, while not an acrostic, still has 22 verses.

The themes of Lamentations unfold as follows: Chapter 1 treats the fallen and desolate city of Jerusalem as a widow weeping over her loss. Chapter 2 connects her misery with the sins of the nation and her people which brought God's judgment. Chapter 3 expresses hope that the Lord's punishment will result in blessing for His people and affirms His goodness: "The steadfast love of the Lord never ceases; his mercies never come to an end; they are new every morning; great is your faithfulness. 'The Lord is my portion,' says my soul, 'therefore I will hope in him.' (vv. 22-24)" Chapter 4 is a lament on the destruction of city and temple but lays the blame upon the people's sins. The final chapter outlines the city's continuing troubles and prays that the Lord will finally restore Zion and not abandon His chosen people, although their sins are great and they certainly deserve it.