Carl Ferdinand Wilhelm Walther was a founding father of The Lutheran Church — Missouri Synod. He served as its first president from 1847 to 1850 and again from 1864 to 1878. Others who worked with him in the Synod's early days included Friedrich Wyneken and Wilhelm Sihler. 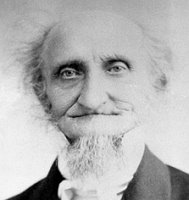 Walther was one of many who stood steadfast in confession of the Evangelical, Orthodox, Catholic, and Apostolic Faith. For a sampling of some of the others in Lutheranism, please see The Meanies of Grace.