NOTE: Regarding the transfer of this major feast, the Lutheran Service Book: Altar Book states on page 960, It is appropriate to observe this feast day in all its fullness during Lent. However, according to historical precedent, when the Annunciation falls during Holy Week or on Easter Day (or also on the Fifth Sunday in Lent in the one-year series), it should not be observed at those times but may be transferred to a weekday following the Second Sunday of Easter. In most of Eastern Christendom, rather than transferring the Annunciation, it is celebrated fully. In Orthodoxy, this normally means the celebratory Liturgy of John Chrysostom. 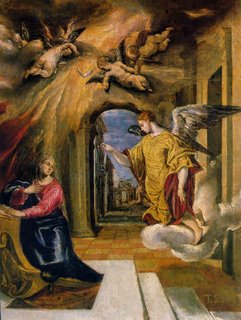 Luke 1:26-38 tells us how the angel Gabriel announced to Mary of Nazareth that she had been chosen to be the mother of the Christ and her response. Mary, a virgin pledged to marry Joseph, briefly wondered how this could be, since she had not had sex with any man.

Once Gabriel told her that the Child was conceived by the Holy Spirit, she humbly accepted this sacred obligation: "Behold, I am the servant of the Lord; let it be to me according to your word. (v. 38)"

Nothing prevents us from supposing that Our Lord was conceived immediately after this. Since the Church from early days observed 25 March as the date of the Annunciation, the celebration of the Christ's Nativity is observed on 25 December, nine months later.

For centuries in vast parts of Europe, 25 March also marked the change to the new year. While it seems somewhat odd and abrupt to change years in the middle of a month, we can imagine that those accustomed to that calendar easily made the adjustment. Furthermore, they could take to heart the reminder that God's chosen time, that most special time when He sent His Son into human flesh, merited such a "strange" circumstance.

Even though the Visitation of Mary to her cousin Elizabeth took place six months later (see Luke 1:39-56) — as Elizabeth neared the end of her own pregnancy with the child who would grow to become John the Baptizer — Mary's song of celebration at that time is also appropriate to remember on the Feast of the Annunciation. In the Magnificat (Luke 1:46-55) the virgin mother of God celebrated God's gift to her, to Israel, and to all people.

Martin Luther wrote a commentary on this canticle. About verse 49, he said, "The 'great things' are nothing less than that she became the Mother of God, in which work so many and such great good things are bestowed upon her as pass man's understanding. For on this there follows all honor, all blessedness, and her unique place in the whole of mankind, among whom she has no equal, namely, that she had a child by the Father in Heaven, and such a child.

"She herself is unable to find a name for this work, it is too exceedingly great; all she can do is break out in the fervent cry: 'They are great things,' impossible to describe or define. Hence men have crowded all her glory into a single word, calling her the Mother of God.

"No one can say anything greater of her or to her, though he had as many tongues as there are leaves on the trees, or grass in the fields, or stars in the sky, or sand by the sea. It needs to be pondered in the heart, what it means to be the Mother of God."

The Annunciation is such an important Christological feast that it takes precedence over even the Sundays in Lent in much of Christendom. See Looking Ahead at Weedon's Blog for details.

O Lord, as we have known the incarnation of Your Son Jesus Christ by the message of the angel to the virgin Mary, so by His cross and Passion bring us to the glory of His resurrection; through the same Jesus Christ, our Lord, who lives and reigns with You and the Holy Spirit, one God, now and forever.