Sarah, whose name means "princess," was wife (and half-sister) of Hebrew patriarch Abraham (Genesis 11:29; 20:12). In obedience to divine command (Genesis 12:1), she made the long and arduous journey west, along with her husband and his relatives, from Ur of the Chaldees to Haran and then finally to the land of Canaan.

She was originally named Sarai but the Lord commanded her change in name (Genesis 17:15). At the same time, He changed Abram's name to Abraham (from "exalted father" to "father of a people"; Genesis 17:5). While her new name held no change in meaning as did her husband's, the Lord still thought it proper to identify her in a new way as He continued the Messianic line through her. 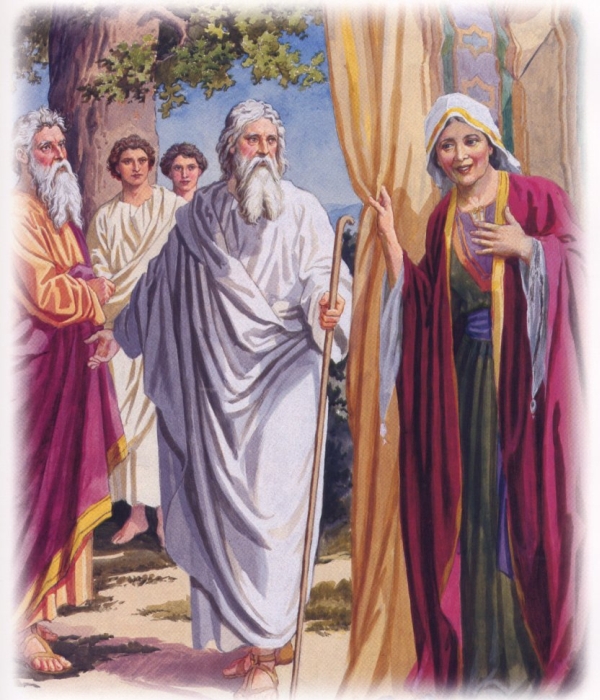 She remained childless until old age. Then, in keeping with God's long-standing promise, she gave birth to a son and heir of the covenant (Genesis 21:1-3). When first promising Abraham and Sarah a son of their own, He told Abraham, "You shall call his name Isaac [he laughs]. (Genesis 17:19)" Evidently, the Lord anticipated both Sarah's celebration at his birth (Genesis 21:6) and her previous disbelieving laughter when she first heard she would become pregnant (Genesis 18:12-15). Thus, God reminds subsequent generations that He always "gets the last laugh."

We remember and honor Sarah as faithful wife of Abraham and the mother of Isaac, the second of the three great patriarchs. Thus, she became biological mother to the people of Israel and spiritual mother to all who believe in Jesus Christ, her greatest descendant. We also acknowledge her gracious hospitality to strangers (Genesis 18:1-8).

Saint Paul used the example of Sarah bearing Isaac according to divine promise to illustrate the relationship Christians have with God through the Gospel's promise. Galatians 4:21-31 contrasts Ishmael, the child of the slave woman Hagar, with Isaac, the promised child of the free woman Sarah. The author of Hebrews was inspired by the Holy Spirit to record that even though she initially laughed at the Lord's seemingly impossible prediction, "By faith Sarah herself received power to conceive, even when she was past the age, since she considered him faithful who had promised. (Hebrews 11:11)"

Scripture quoted from the ESV.