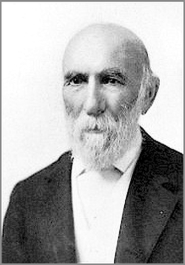 Matthias Loy (1828-1915) was born on 17 March to Matthias and Christina Loy, a pair of German immigrants. The family lived in near-poverty in Cumberland County, Pennsylvania, near Harrisburg. He was the fourth of seven children. Matthias, Senior was a lapsed Catholic who apparently held only nominal religious beliefs for most of his life. Christina came from pietistic Lutheran stock in Württemberg. She did what she could to give the family some semblance of a Christian education and made sure that all but the eldest child were baptized as infants. Even her first-born son eventually was confirmed into the Lutheran Church.

When Matthias was six years old, the family moved to Hogestown, Pennsylvania. He lived with his family until he was fourteen. They then apprenticed him to Baab and Hummel Printers of Harrisburg. During the next six years, he worked for them while attending school. Mr. Hummel brought Matthias to the attention of Harrisburg minister C. W. Schäffer. Pastor Schäffer urged Matthias to consider a pastoral vocation. To this end, he studied studied Greek and Latin under the Harrisburg Academy's principal. This led to enrollment as a full student at the Academy. He hoped to enter the Gettysburg Theological Seminary, perhaps the epicenter of Lutheran liberalism in America.

Illness led Loy's doctor to encourage the young man to move farther west. Matthias found an employment opportunity with the United Brethren Publishing House in Circleville, Ohio. There he would become printer for the Brethren's semimonthly German paper. Loy came to Circleville in 1847 and quickly met the Lutheran pastor. This good soul suggested that Matthias waste no more time getting on with his pastoral education and suggested that he enroll at the Theological Seminary in Columbus. The Evangelical Lutheran Synod of Ohio was much more conservative and confessional than the Lutherans he had left behind in Pennsylvania. 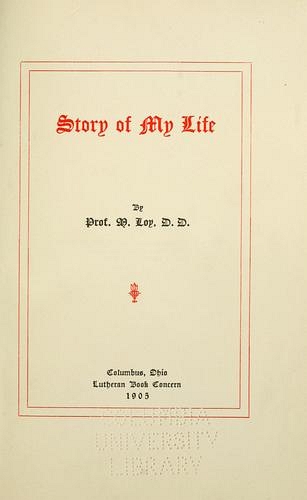 With the promise of financial aid through the Lutheran pastor, Loy sought and received release from his printer's contract and left for Columbus. Of Matthias's time there, C. George Fry writes, "It was at this institution that he received the only two years of formal higher education deemed necessary to be a pastor. In 1849, after a two year 'cram course' that included academy, college, and seminary, Loy was graduated and installed as a minister in Delaware, Ohio."

Loy was finally surrounded by orthodox Lutheran theology and he made the most of his time at the seminary. As a student, he was immersed in Lutheran doctrine and began reading Der Lutheraner, edited by C. F. W. Walther. This led to a long relationship with Dr. Walther, a friendship that grew so great that even their eventual disagreements over predestination and the fracturing of the Synodical Conference couldn't destroy.

According to Fry, these two men, along with Charles Porterfield Krauth, "must be seen as a common effort to preserve traditional Lutheran theology from the corrosive effects of 'the acids of modernity' in the last half of the nineteenth century. These three titans — Walther in the West, Krauth in the East, and Loy in the middle — could be compared to three anchors holding fast the ship of Lutheran Confessionalism during the ferocious storms of the Modernist-Fundamentalist Controversy."

In 1860, the Joint Synod of Ohio elected Loy President. Four years later, he was appointed editor of the Lutheran Standard. After sixteen years in the ministry, Capital University, Columbus, Ohio called Loy as professor of theology. He resigned as president of the Ohio Synod in 1878. Around this time he also returned the call to become English-language professor of theology at Concordia Seminary, St. Louis. Wilhelm Friedrich Lehmann, Loy's successor as synodical president, died in 1880 and Loy returned to that office, succeeding him also as President of Capital University. He started the Columbus Theological Magazine in 1881. Loy retired as professor emeritus in 1902 and died on 26 January 1915. 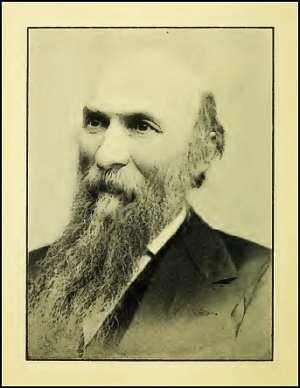 Loy was instrumental in the formation of the Synodical Conference. However, at the Ohio Synod meeting at Wheeling in 1881, the synod withdrew from the Conference. This came about over sharp differences in understanding Predestination. Many Ohio Synod pastors taught that God predestined people according to His foreknowledge of whether they would come to faith while the Missouri Synod condemned this as false doctrine.

During his life, Loy wrote several books. Of special note is his seminal work The Augsburg Confession: An Introduction to Its Study and an Exposition of Its Contents.

He also wrote at least twenty hymns, including An Awe-full Mystery Is Here, The Law of God Is Good and Wise, The Gospel Shows the Father's Grace, and Jesus, Thou Art Mine Forever. His hymn translations included All Mankind Fell in Adam's Fall, The Bridegroom Soon Will Call Us, Let Me Be Thine Forever, and Thy Table I Approach.

*Since his death date (26 January) and birth date (17 March) both conflict with long-standing festivals on the sanctorial calendar (Titus and Pádraig respectively) and since 27 January belongs to John Chrysostom, I moved Loy's commemoration the first open date, 28 January.

Additional Reading includes Loy's autobiography, The Story of My Life, which the Internet Archive has in several formats, including PDF, Nook (EPUB), and Kindle (MOBI). See also entries at Net Hymnal and the Christian Cyclopedia.

O Lord God, heavenly Father, we pray that, as You raised up Matthias Loy to lead Lutherans in America into a renewed appreciation of their confessional heritage and to a fuller confidence in the saving Gospel of Jesus Christ, so You would continue to provide us with faithful pastors and leaders, keep us steadfast in Your grace and truth, defend us against all enemies of Your Word, and bestow on Christ's Church Militant Your saving peace; through Jesus Christ, Your Son, our Lord, who lives and reigns with You and the Holy Spirit, one God, now and forever.