Bits and pieces of Israel's prophetic blessing in Genesis 49 are familiar to many Christians, especially to those paying attention during Advent:

Judah, your brothers shall praise you;
your hand shall be on the neck of your enemies;
your father's sons shall bow down before you.
Judah is a lion's cub;
from the prey, my son, you have gone up.
He stooped down; he crouched as a lion
and as a lioness; who dares rouse him?
The scepter shall not depart from Judah,
nor the ruler's staff from between his feet,
until tribute comes to him [or, "until Shiloh comes"];
and to him shall be the obedience of the peoples.
Binding his foal to the vine
and his donkey's colt to the choice vine,
he has washed his garments in wine
and his vesture in the blood of grapes.
His eyes are darker than wine,
and his teeth whiter than milk. (vv. 8-12)

http://www.grammarly.com/blog/2016/why-english-is-a-germanic-language/ Yet while we recognize this as Messianic prophecy, what's with the donkey and grapevine stuff? The foal and colt language may remind us of Zecheriah 9:9 and its fulfillment on Palm Sunday. We get an idea of royal splendor with the wine-washed robes, dark eyes, and gleaming teeth. Yet what's so Messianic about where the livestock is tethered?

Xrysostom's post on biblical beer triggered a memory of things learned long ago. He wrote, "The time of Messiah was prophesied to be a time of free-flowing wine, illustrated by Jesus' first miracle at the wedding feast in Cana." 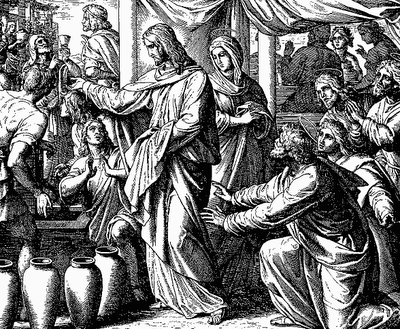 In an agrarian culture, especially in a dry climate where even the "wealthy" often have little to spare and a small margin for error in planting and harvesting, Jacob's comment seems patently ridiculous. If you need every grape in order to produce enough wine and raisins for the next year, why in the world would you tie your animals to the vines? A donkey will eat anything that's green (and many things that aren't). To do this invites disaster.

When could you ever afford to act so extravagantly? Only if you already had more and better wine than you ever imagined. More? How about 120 - 180 gallons? Better? How about learning that "the good wine" had just appeared? The Bridegroom had come and it was time to party (cf. Mark 2:19)!