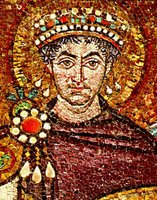 Justinian, Christian Ruler and Confessor of Christ, was emperor of the East from A.D. 527 to 565, during the time of decline of the Roman Empire. Aided by his beautiful and capable wife, Theodora, he restored majesty to the Byzantine court and is considered by historians to be the last true "Roman" emperor. During his reign the Empire experienced a renaissance, due in large part to his ambition, intelligence, and strong religious convictions.

Perhaps due in part to his own family's peasant members, Justin decreed that differences in social class were no longer barriers to marriage. Some time later, Justinian found a woman to claim as his bride. Since Justin had removed class barriers, Justinian made full advantage of the changes by taking Theodora as his wife. Here was a truly disparate set of individuals: While the emperor in waiting had ascended from peasant stock to ruling class, his bride came from a background considered lower than peasant — perhaps even lower than slave, for she was an actress and a courtesan.

Despite such unsavory beginnings, Theodora proved herself a worthy companion for the Emperor. Throughout her life she was Justinian's staunchest supporter and one of his most trusted advisers. Many historians believe that without her intellect and decisiveness, Justinian might have been deposed and the empire torn apart in the Nika riots.

Although he was responsible for a considerable number of civil and military accomplishments, Christians chose to remember Justinian for his religious contributions. He was a champion of orthodox Christianity. From this confessional position, he attempted to unite a sharply divided Church, seeking agreement among the parties in the Christological controversies of the day. He was particularly eager to bridge the gap between Chalcedonian Christians and the Monophysites. These parties disputed the relationship between the divine and human natures in the Person of Christ. His special interest likely because a large number of Monophysite Christians lived within the empire — including, at least in her younger years, his own wife. The Fifth Ecumenical Council in Constantinople in AD 533 addressed these disagreements but a full solution never presented itself.

Both Justianian and Theodora accomplished much. However, as with many other renowned champions of the faith, the emperor sometimes exhibited less than exemplary behavior. He often fostered overzealous attempts to forward or defend Christianity by fiat or force of arms. The list of those he suppressed, condemned, and sometimes killed is considerable. He set Athens' Neoplatonic Academy under state control, ending its teaching of unchristian Hellenistic philosophy. He suppressed Paganism. He halted the worship of Amun at Augila in the Libyan desert and that of Isis on the island of Philae.

Justinian's government restricted the civil rights of Jews and the emperor actively interfered with the synagogues, going so far as to forbid the use of the Hebrew language in worship. Resistance might be met with corporal penalties, exile, and property confiscation. The empire likewise persecuted the Manicheans. They, too, faced punishment and threats including exile and capital punishment. The incident that probably leaves the darkest stain on his reputation occurred at Constantinople. There, after severe questioning, a number of Manicheans were executed in his presence. Some were burned, others drowned.

The other side of his enthusiasm for God's Word and orthodox Christianity exhibited itself in his missionary zeal. Missionary ventures that Justinian sponsored helped to lead thousands in Africa and Asia Minor to the Christian Faith. For example, John of Ephesus claimed to be involved in the the conversion of some 70,000 pagans in Asia Minor. Others led to Christianity included Huns dwelling near the Don, the Abasgi, the Heruli, and the Tzani of Caucasia. A mission to the Nabataeans was led by Julian the Presbyter and the Bishop Longinus. Justinian also tried to strengthen Christianity in Yemen by sending a bishop from Egypt to that region.

Theodora, born about twenty years after her husband, died about twenty years before he did. Meanwhile, Justinian died in his eighties, without seeing the completion of his desire for a solidly orthodox Christian empire. Due to his ongoing championing of the faith, the Eastern Church counts him as a saint, as it also does Theodora.