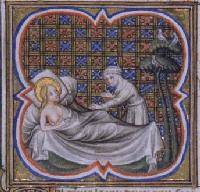 Also known as Saint Elizabeth of Thuringia — Szent Erzsébet in her native tongue — Elisabeth (also Erzsebet) was born in Sárospatak in 1207, the daughter of King András II and his wife Gertrude of Merania. When only four years old, she was betrothed by parental arrangement to Ludwig (Louis), son of Hermann I, Landgrave of Thuringia, and Duchess Sophia. At this tender age, the child moved to the Thuringian court. She married him in 1220, when just fourteen. He was only twenty and had been ruling as Ludwig IV since 1217.

Elisabeth often supervised the care of the sick and needy, even giving up her bed to a leper at one time. Unlike many medieval men, particularly the rulers, Louis encouraged her efforts and contributed directly to them. This seems due, in large part, to a faith that depended much upon works in order to guarantee eternal reward — or, at least, to avoid Purgatory.

When she was widowed at 20, circumstances drastically changed. Already possessed of a charitable heart, Elisabeth increased her work on behalf of others — her confessor, the inquisitor Konrad von Marburg, encouraging (or pushing) her growing spiritual discipline. Some accounts say that Konrad not only enforced his will through a strong personality but that he also resorted to beatings and separating her from her children. 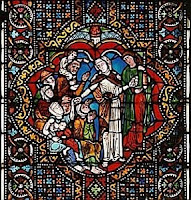 Later, she arranged for her children's well-being and entered into life as a nun in the Order of Saint Francis. Her self-denial, quite possibly abetted by harsh treatment at the hands of her confessor, led to failing health and an early death in 1231 at age 24. Remembered for her self-sacrificing ways, Elisabeth is commemorated through the many hospitals named for her around the world.

She was laid to rest in a gold shrine in Elisabeth Kirche in Marburg. The second illustration above is a scene of her helping the poor from that church's Elizabeth Window. Her popular cultus, aided in large part by political considerations, led to a rapid canonization. In 1235, Pope Gregory IX named her St. Elisabeth. Her official canonization ceremony was Pentecost (28 May), only about three and a half years after her death. The lasting effect she had on individuals, the Church, and on health care has led many to call her "the greatest woman of the German Middle Ages." In honor of Elisabeth and her contributions to Church and society, the city of Erfurt chose her as its 2007 "cultural theme."

Almighty God, by whose grace your servant Elisabeth of Thuringia recognized and honored Jesus in the poor of this world, grant that we, following her example, may with love and gladness serve those in any need or trouble, in the name and for the sake of through Jesus Christ our Lord, who lives and reigns with you and the Holy Spirit, one God, now and forever.