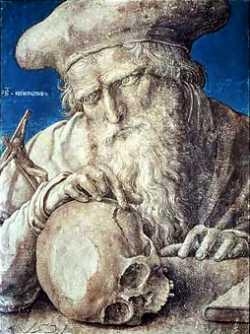 Saint Jerome (Eusebius Sophronius Hieronymus), translator of Holy Scripture, was born in a little Dalmatian village on the Adriatic Sea around the year AD 345. Although he came from Christian parents, he wasn't baptized until he went to study in Rome in about AD 360.

After extensive travels, he chose the life of a monk and spent five years in the Syrian desert. There he learned Hebrew, the language of the Old Testament. However, the time spent there convinced him that the life of a hermit monk was not for him and he pursued holy orders and advanced education.

After ordination at Antioch and visits to Rome and Constantinople (where he studied under Gregory of Nazianzus), Jerome settled in Bethlehem. From the original Hebrew, Aramaic, and Greek, he used his ability with languages to translate the Bible into Latin, the common language of his time.

Jerome chose to use "street" or "vulgar" Latin rather than its classical form. Thus, his translation was called the Vulgate (from its vulgar Latin) and was the authoritative version of the Bible in the western Church for over 1,000 years. 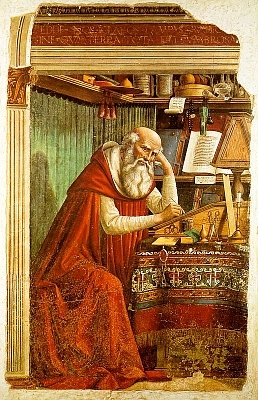 A man of considerable brilliance, Jerome could also be argumentative, arrogant, dogmatic in trivial matters, and easily swayed by people holding superior office. Yet he also was able to break with the influence of Origen under which he was raised and was a champion of understanding the original languages of Scripture and of exegesis over allegory in interpretation.

In Roman Catholic hagiography, Jerome is patron saint of translators and librarians. His symbol in Christianity is often a pen. In religious art, it isn't unusual to see him portrayed with an odd blend of clothing and trappings ranging from ascetic anchorite to opulently garbed cardinal. He is often posed with a crucifix, a skull, and a Bible.

Jerome died on 30 September AD 420. Originally interred at Bethlehem, his remains were eventually taken to Rome.

More information is available from James Kiefer's Hagiographies and Wikipedia.

O Lord, O God of truth, whose Word is a lantern to our feet and a light upon our path: We give you thanks for your servant Jerome, and those who, following in his steps, have labored to render the Holy Scriptures in the language of the people; and we pray that your Holy Spirit will overshadow us as we read the written Word, and that Christ, the living Word, will transform us according to your righteous will; through Jesus Christ our Lord, who lives and reigns with you and the Holy Spirit, one God, now and forever.