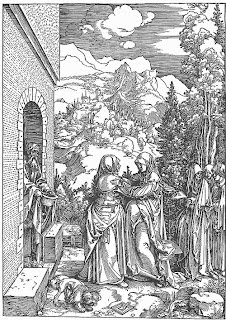 This major Christological feast commemorates the joyous visit Mary paid to her relative (probably her cousin) Elizabeth, following The Annunciation. Inspired by the amazing news that she was to become the mother of the Christ and in response to the joyous word that her old and previously barren kinswoman was also pregnant, she joined Elizabeth during her sixth month of pregnancy (see Luke 1:39-56).

After Mary declared the wondrously good news, Elizabeth replied to the Virgin, "Blessed are you among women, and blessed is the fruit of your womb! ... Behold, when the sound of your greeting came to my ears, the baby in my womb leaped for joy. (vv. 42, 44)" She concluded by giving full credit and glory to God while also commending her young cousin's hearty faith: "Blessed is she who believed that there would be a fulfillment of what was spoken to her from the Lord. (av. 45)"

In Roman Catholicism, Vatican II changed the date of the observation from 2 July to 31 May in order to more accurately reflect the Bible's chronology regarding the life of Christ. Several other Western churches followed suit. In The Lutheran Church —Missouri Synod, today is celebrated in the One Year Lectionary while the Three Year Lectionary moves the feast date to 31 May.

My soul magnifies the Lord,
and my spirit rejoices in God my Savior,
for He has looked on the humble estate of his servant.
For behold, from now on all generations will call me blessed;
for He who is mighty has done great things for me,
and holy is His name.
And His mercy is for those who fear Him
from generation to generation.
He has shown strength with His arm;
He has scattered the proud in the thoughts of their hearts;
He has brought down the mighty from their thrones
and exalted those of humble estate;
He has filled the hungry with good things,
and the rich He has sent empty away.
He has helped His servant Israel,
in remembrance of His mercy,
as He spoke to our fathers,
to Abraham and to his offspring forever.