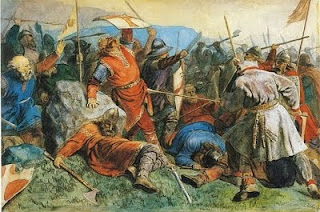 Ólafr Haraldsson (also known as Olav, Olafe, Oláfr hinn helgi, and Olavus rex) was born in 995 to Harald Grenske and Åsta Gudbrandsdatter. While Snoore says that he was baptized in 998 in Norway, it's more likely that it was by the hand of Archbishop Robert in Rouen, France around 1010. As was common among young Norsemen, he spent much of his youth going a-viking (raiding), first in the Baltic, then Denmark, and finally in the British Isles. He was nicknamed "Digre" (physically large) and some believed him to be a reincarnation of a previous (pagan) Viking king Olav Digre. While involved in numerous armed conflicts, Olaf also developed a deep interest in Christianity.

Olaf declared himself King of Norway in 1015. Following battles with various petty kings, he ruled until 1029, although his strength was greatly reduced following his loss in the Battle of the Helgeå (1026). As monarch, he struggled to root out heathenism and make Christianity the religion of the realm. Like his ancestor Olaf Trygvesson, he frequently attacked the old faith and customs. Olaf destroyed pagan temples and built Christian churches in their place. He brought many bishops and priests from England, a practice later followed by King Saint Canute of Denmark. It appears that he based ecclesiastical organization on the Anglo-Saxon model.

The rebellion against Olaf stemmed but in part from his unflinching Christianity. Many of the nobles were also exasperated by his ongoing struggle with the old Norse method of governance and his never-ending desire for a truly united Norway. The governing clans enlisted King Canute of Denmark and England for help in ousting Olaf. Once he was banished, the clans elected Canute as King of Norway. Therefore, he became not only an icon of the Christian Faith but also one of Norwegian nationalism — an image he carries even among secular Norwegians to this day. 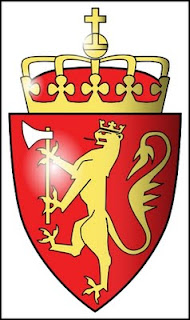 After Canute's vassal Håkon Eiriksson died, Olaf returned from his two year exile and met the rebellious clans at Stiklestad on 29 July 1030. Although neither King Canute or the Danes took part, Olaf — who fought courageously — was mortally wounded at that battle and died in the battlefield. His final recorded words were the prayer, "God help me."

He was disinterred a year after his death and his remains moved to the Church of St. Clement in Nidaros (current Trondhjem). There, Bishop Grimkel and Earl Einar Tambeskjelver placed his corpse in a coffin and laid it on the church's high altar. At that time, the bishop also declared Olaf a saint. Although Olaf was embraced by most Norwegian Lutherans, his remains disappeared as part of an iconoclasm that often accompanied the Reformation.

His cult spread widely in the Middle Ages, moving from Norway to Denmark, Sweden, and even parts of England. Although a rather harsh ruler and prone to rough treatment of his enemies, Olaf became Norway's patron saint. The cult of Olaf not only unified the country, it also fulfilled the conversion of the people, something for which the king had fought so hard. While divisive in life, Olaf in death held a unifying power that defied outside state and religious rulers attempts to undo his dream.

Although Olav was certainly not the first to introduce Christianity to Norway, he first codified the faith in 1024, laying the basis for the Church of Norway. So high did Olaf's legal arrangements for the Church of Norway come to stand in the eyes of the Norwegian people and clergy, that when Pope Gregory VII attempted to make clerical celibacy binding on the priests of Western Europe in 1074-75, the Norwegians largely ignored him, since celibacy wasn't mentioned in Olaf's legal code for their church. Although he continued to be known through most of his life as Olaf digre, in death he remains known by most as Olav den hellige (Olaf the Holy).

The coat of arms of Norway is a lion holding the battle axe of St. Olaf in his forepaws.

Almighty, eternal God, you are the crown of kings and the triumph of martyrs. We thank You for the bold confession made by Your blessed martyr, Olav We praise your greatness in his death and we pray You give us the crown of life that You have promised those who believe in Your Son Jesus Christ, who lives and reigns with you and the Holy Spirit, one God, forever and ever.

See Wikipedia, the Catholic Encyclopedia, and the Christian Cyclopedia for more.