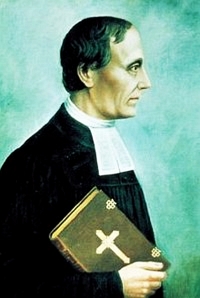 German pastor and theologian Klaus Harms was born at Fahrstedt, Schleswig-Holstein on 25 May 1778 and baptized the next day in the neighboring community of Marne. Before entering university, he worked in his father's mill. He also farmed for a brief time.

His early religious and philosophical leanings tended strongly toward Rationalism but change commenced after he began studies at the University of Kiel. First, Friedrich Schleiermacher led Harms toward a less extreme, slightly more Evangelical understanding of Christianity. Further study of Scripture and older Lutheran writers pulled him away from the liberal, inner-conscious Christianity of Schleiermacher toward traditional, orthodox Lutheranism.

By the time of his graduation, it's unlikely that Harms would have been certified for the ministry by the crass Rationalists or the disciples of Schleiermacher. Therefore, he took his oral and written examinations before J. L. Callisen, the orthodox Lutheran superintendent of Holstein.

Following his studies and a stint as tutor and guest preacher, Harms was married in Probsteierhagen in 1806. Later that year, he was called as deacon (assitant pastor) at Lunden. After serving there for ten years, he accepted a call to serve the St. Nikolai Church in Kiel as archdeacon. He became chief pastor and superintendent in 1835. All through this period he continued to distance himself from Rationalism and the feeling- and experience-based theology of Schleiermacher to increasingly espouse the pure Lutheran doctrine of the 16th Century. 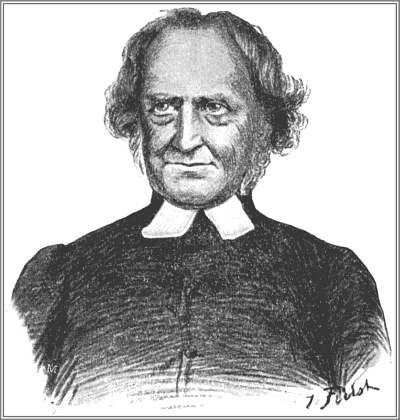 Harms's personality and preaching style led to growing popularity in Kiel and beyond. He drew international attention in 1817. On the 300th anniversary of the Reformation, he published Luther's original Ninety-five Theses and ninety-five additional theses of his own composition, "directed against all sorts of false and confused knowledge within the Lutheran church." These latter attacked Rationalism and unionism and called for a return to pure Lutheran theology and practice.

Much as Luther condemned the magisterial use of reason which placed rational thought above faith in Christ, Harms wrote, "We could call reason our time's pope, our antichrist.... (Thesis 9)" He claimed the right of Lutherans to have authentic Lutheran clergy: "Reason rages in the Lutheran church: it tears Christ from the altar, throws God's word from the pulpit, casts excrements into the baptismal water, mixes all sorts of people when it comes to God-parents, erases the address of the confessional chair, hisses out the priests, and all people with them, and has been doing this for a long time. (Thesis 71)"

While Harms had considerable influence throughout Germany, we must also recognize his huge, albeit indirect, contribution to American Lutheranism. His Christ-centered, confessional Lutheranism led C. F. W. Walther and others to their awakening into true Lutheranism later during the 19th Century.

Besides his credentials as a theologian, Harms was a qualified musician. As such, his growing Lutheran identity led him to restore Lutheran hymnody to the church. Many of his textual reforms remain to present times. However, he never had the same success with the restoration of the original melodies and the bold syncopation of the traditional chorales stayed buried under the bland metrical style for many years following.

Among his writings are the aforementioned Theses, volumes of his sermons, an autobiography, and his 1830 Pastoraltheologie. Due to blindness, Harms resigned his pastorate in 1849. He died on 1 February 1855.

Quotes from The 95 Theses of Claus Harms at the Internet Archive's copy of LutheranWiki.

See also the articles at Christian Cyclopedia, the 1911 Encyclopædia Britannica, and Wikipedia.  ¶ 00:00 |