The Good King Wenceslas of whom we sing is also known as Wenceslaw, Wenceslaus, Václav, Wenzel, and by other variations on his name. Wenceslaus actually wasn't a king; he was Kníže (Duke) of Bohemia. However, we still reckon Wenceslaus I as "good" because of his fidelity to the Christian Faith.

His grandfather, Bořivoj I, Kníže of the Czechs and his grandmother Ludmila (Ludmilla) were converted by the Lord working through Saints Cyril and Methodius, the noted missionaries to the Slavic people. After his father Wratislaus (Wratislaw, Vratislav) I died in battle against the Magyars, Wenceslaus was in line for succession. His grandmother's teaching slowly led him into following the teaching of the Christian Church rather than that of his mother Drahomíra the Arrogant, who was a token Christian while her husband lived but then reverted to the old religion upon his death. Wenceslaus's (twin?) brother Boleslaus I (the Cruel) apparently followed his mother's pagan ways. Their sister Střezislava received the appellation "the Pretty." 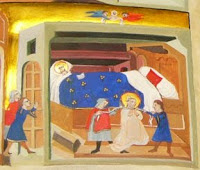 After Wratislaus died, Wenceslaus was raised by Ludmila, who reared him in the Faith. Wenceslaus was a minor, so Ludmila governed as regent. A dispute between the fervently Christian regent and Drahomíra drove Ludmila to seek sanctuary near Beroun. Evidently, Wenceslaus's conversion had enraged his mother, who was also trying to gain support among the pagan nobility. Drahomíra purportedly gained revenge by having Ludmila killed by two nobles at Tetin on 15 September 921.

The regency passed to Drahomíra, who evidently gave good account of herself in that area. She strengthened Czech borders against foreign incursions and suppressed the rival Slavnik clan. However, she still worked to reconvert her son to paganism, but Wenceslaus continued practicing Christianity in secret.

Upon attaining his majority, Wenceslaus assumed the rule and exiled Drahomíra. He aided Christianity's spread throughout Bohemia by building churches and cathedrals and also by accepting the influence of the Holy Roman Empire. To the nobles, such behavior threatened both their pagan traditions and Czech sovereignty. He became a vassal of Henry I (the Fowler) of Saxony in 929. This submission, whether by choice or by force, further increased the hostility of his non-Christian lieges.

Boleslaus gathered some of these disaffected nobles around himself for several overlapping purposes. First of all, Wenceslaus was a threat to their paganism (unlike Wenceslaus, Boleslaus completely agreed with his mother's beliefs). Secondly, they considered Wenceslaus a "sell-out" if not an outright traitor to Czech heritage and governance. Finally, Boleslaus was next in line for the throne — something he strongly coveted.

These factors led the younger brother to invite the elder to a celebration of the Feast of Saints Cosmas and Damian. On the way there, Boleslaus or his henchmen murdered Wenceslaus — the most commonly purported venue being at the very doors of the church toward which they traveled. Bolesaus claimed the title "Prince" — "Duke" being considered recognition of vassalage to the Holy Roman Empire.

Upon the death of Boleslaus I, his son Boleslaus II became Duke of Bohemia. Contrary to the father's nickname "the Cruel," the son embraced Christianity and became known as Boleslav the Pious. Included among his accomplishments was the establishment of the Bishopric of Prague. 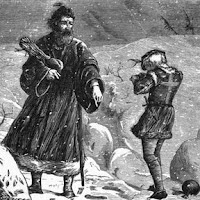 Meanwhile, the legend of Wenceslaus continued to grow in the telling. His piety and refusal to abandon Christianity remain part of the story of the Faith. The Church considered him a martyr and purported miracles followed his invocation. Thus, he was canonized as Saint Wenceslaus and remains primary patron of the Czech people and the Czech Republic.

The carol Good King Wenceslas connects him with the earlier Saint Stephen and is based upon the general perception of his piety, humility, and desire to serve. Whether or not grounded in an actual event, it reflects the esteem in which the Czech people hold him.