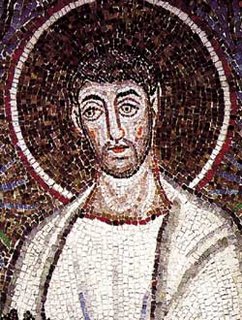 Cyprian (Thascius Caecilius Cyprianus) was born around AD 200 in the north African city of Carthage to a well-established pagan family. Most scholars believe that he came from either Punic or Berber stock. That he was of the privileged class may be shown, in part, from his place of death: He was martyred in his own villa.

After receiving a quality (albeit pagan) education, Cyprian became a Christian and was baptized sometime between 245 and 248. He passed quickly through the ranks of clergy, being ordained in short order as deacon, then presbyter. Election and consecration as Bishop of Carthage followed in short order, sometime during 248 or 249. This delighted the poor of the community, who'd benefited greatly from Cyprian giving away much of his wealth after his baptism, but a party in the Carthage church opposed him throughout his episcopacy.

During the persecution of Roman Emperor Decius, Cyprian fled Carthage but returned two years later. During his absence, some accused him of cowardice or lack of faith while others defended him for remaining alive to help govern the church. His own testimony was that he acted as God willed him to do through visions and divine commands. From hiding, he remained a faithful ruler of his flock, acting through a deacon brave enough to carry his words back to Carthage.

Upon his return from exile, Cyprian had to deal with the problem of Christians who had lapsed from their faith under persecution and now wanted to return to the Church. He decided that they could be restored, but that restoration would come only after a period of penance demonstrating their faithfulness. During the following years, Cyprian also became part of the debate over the efficacy of baptism administered by heretics. While some said only the form was essential, Cyprian claimed that even if all the words and actions were correct, it was no baptism if administered outside the Church. Therefore, Cyprian directed that any who were baptized in heretical sects would be given Christian baptisms before being joined to the Church. A majority of the North African bishops agreed with him, but this rigorous interpretation of dogma was later moderated by the Church.

His position in the matter of heretic baptisms places him squarely among many North African theologians of the period. He seems to be a way station between the strictness of Tertullian and the even more extreme doctrinal interpretations of the Donatists, who concerned themselves with the efficacy of the Lord's Supper being administered by a priest who lapsed or recanted the faith during times of persecution.

During persecution under Emperor Valerian, Cyprian first went into hiding and later gave himself up to the authorities. He was beheaded for the faith in Carthage in the year 258. According to witnesses, his only words upon hearing the death sentence pronounced were, "Thanks be to God!"

Besides fulfilling his pastoral and episcopal obligations, Saint Cyprian gave himself to theological writing. His most noted work was De unitate ecclesiae, where he professed belief in one episcopate — not that of Rome, but of the Church at large — as the foundation of the Church. In this treatise he wrote, "He can no longer have God for his Father who has not the Church for his mother; ... he who gathers elsewhere than in the Church scatters the Church of Christ." In the same work, he also said, "Nor is there any other home to believers but the one Church." Unlike some of his contemporaries, especially those who may have acted out of jealousy over his popularity, most modern scholars and average Christians who study him are left with a quite favorable impression of the man.

Note: The liturgical calendar of The Lutheran Church — Missouri Synod transfers the commemoration of Saint Cyprian to this day since 14 September is Holy Cross Day. This is in line with the practice of much of the Christian Church.

Almighty God, who gave Your servant Cyprian boldness to confess the Name of our Savior Jesus Christ before the rulers of this world and courage to die for this faith, grant that we may always be ready to give a reason for the hope that is in us, and to suffer gladly for the sake of our Lord Jesus Christ; who lives and reigns with You and the Holy Spirit, one God, now and forever.