The Apostle Thomas (Hebrew or Aramaic for "twin") was also called Didymus (Greek for "twin"); either his parents gave him a most peculiar name or else he consistently went by his nickname. 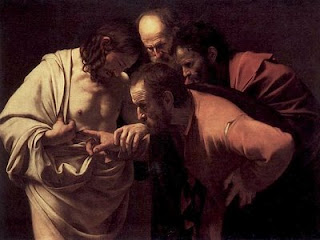 Absent when the Risen Lord appeared to the other apostles on the evening of Easter Day, He refused to believe that Christ had indeed risen until he had seen Him for himself. When he saw Him the following week, he said to Jesus, "My Lord and My God."

Because of this, he has been known ever since as "Doubting Thomas," although "Disbelieving Thomas" or even "Faithless Thomas" probably would be more accurate. See John 20:19-29 for the full account.

We also remember his earlier words, when Jesus announced His intention of going to Jerusalem, even though His life was in danger there: Thomas said to the others, "Let us also go, that we may die with him." (John 11:7-16) Thus, we see that Thomas was sturdily loyal.

At the Last Supper, Jesus said: "In my Father's house are many rooms. If it were not so, would I have told you that I go to prepare a place for you? And if I go and prepare a place for you, I will come again and will take you to myself, that where I am you may be also. And you know the way to where I am going." Thomas was the one who responded, "Lord, we do not know where you are going. How can we know the way?" To this Jesus answered: "I am the way, and the truth, and the life. No one comes to the Father except through me. (see John 14:1-6)"

John 21 records Thomas as one of the seven disciples fishing on the Sea of Galilee when the Lord appeared to them. Aside from these Biblical accounts, he appears only as a name on lists of the Apostles.

A few centuries later, a story circulated in the Mediterranean world that he went to preach in India; a community in the Kerala district claims descent from Christians converted by the preaching of Thomas. Among Indian Christians, tradition claims that Thomas was speared to death near Madras, and accordingly is often pictured holding a spear.

Since he was credited with the building up of the Church through his missionary journeys, a carpenter's square also is a regular symbol of the apostle.

Almighty and ever living God, who upheld and strengthened Your apostle Thomas with sure and certain faith in Your Son's resurrection, grant us perfect and unwavering belief in Jesus Christ, our resurrected Lord and God, that our faith may never be found wanting in Your sight; through this same Jesus Christ, who lives and reigns with You and the Holy Spirit, one God, now and forever.