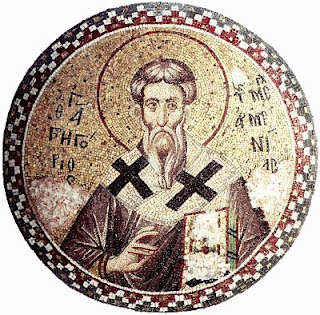 Christian pastor, evangelist, and bishop Gregory the Illuminator (or Enlightener; Armenian: Գրիգոր Լուսաւորիչ, transliterated Grigor Lusavorich) was born sometime between AD 240 and 260 and lived until around AD 311 or 312. He is the patron saint of Armenia and was first official head of the Armenian Apostolic Church.

The Armenians were the first people to adopt Christianity as their state religion. Tertullian and Eusebius of Caesaria suggest that Christianity was practiced in Armenia as early as the 2nd Century AD.

Sometime before AD 301, the Lord used Gregory as his instrument to convert King Tiridates (or Trdat) III. For some twelve to fourteen years previously, he'd been imprisoned in a deep pit and possibly tortured. This was likely due in part to his father's participation in a plot against Khosrov II, Tiridates' father, and partially because of his steadfast refusal to participate in pagan rites. His recall came around the year 297, when he was asked to restore to sanity Tiridates III, who lost his mind after being betrayed by Diocletian.

In 302, Gregory was ordained bishop. He founded the Cathedral of Etchmiadzin, near Mount Ararat in 303. This remains the seat of the supreme patriarch (catholicos) of the Armenian Church. Gregory went on to evangelize several other Caucasian nations and baptized the kings of Iberia (Georgia), Lazes, and Albania.

Sometime before his death he retired to a solitary life in the wilderness. He is remembered in both the Eastern and Western Church.

As an aside, legend claims for this relatively small nation the graves of four apostles: Bartholomew, Matthias, and Simon and Jude.

Almighty God, whose will it is to be glorified in Your saints, You raised up your servant Gregory the Illuminator to be a light in the world, and to preach the Gospel to the people of Armenia. Shine, we pray, in our hearts, that we also may show forth Your praise, who called us out of darkness into Your marvelous light; through Jesus Christ our Lord, who lives and reigns with You and the Holy Spirit, one God, now and forever.  ¶ 00:00 |