Just as Andrew was the first of the Apostles, so the Western Church uses his feast to mark the beginning of the Church Year. The First Sunday of Advent is defined as the Sunday on or nearest his feast. (The way the reckoning was designed, it also means that there are always four Sundays in Advent. This year, the First Sunday in Advent is 27 November, three days before Saint Andrew's Day. 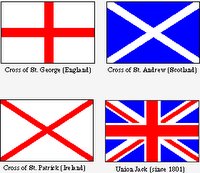 Scotland considers Andrew to be its national saint. Meanwhile, George (23 April), Pádraig (17 March), and Dewi (1 March) fill these roles for England, Ireland, and Wales, respectively. George, a soldier, is customarily pictured as a knight with a shield that bears a red cross on a white background. This became the national flag of England.