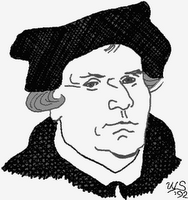 The beginnings of the Reformation came well before its birth date. Renaissance Humanism ushered in an age of classical studies, including the teaching of Greek and Hebrew. This paved the way for in-depth study of the Scriptures in their original languages. Theological errors and moral abuses were rife in the Western Church and certain individuals had already been moved to challenge and resist these errors.

By the time Martin Luther was born, John Hus and Girolamo Savonarola had been killed for their efforts at reform and the remains of John Wycliffe had been exhumed and burned. Wycliffe and Hus, especially, tried to bring the Bible into the vernacular. Nationalism and territorial pride, pressure from the Turks, and a general restlessness all joined into making the early 16th Century a time to foment change — even violent change and revolt.

Into this mix stepped Augustinian friar and university professor Martin Luther. Stricken for years by an active conscience and a false understanding of Jesus Christ as a terrible judge, he was driven to the Scriptures by the work of the Holy Spirit, especially through the strong but gentle guidance of Johann von Staupitz. His studies led him to the understanding that grace, not wrath, is Scripture's central theme and that justification by grace through faith in Christ is Christianity's cardinal doctrine.

As he began looking without himself more than within, Luther saw that his misunderstanding of the Gospel came not only from inside, by the resistance of his Old Adam to God's Word. Instead, he more clearly perceived how far from Scripture many teachings and practices were. Therefore, he resolved to address certain abuses based upon his enlightened understanding. Triggered by the sale of indulgences by Johann Tetzel, he composed ninety-five topics for theological debate, many of which focused directly on matters of God's grace versus human works. 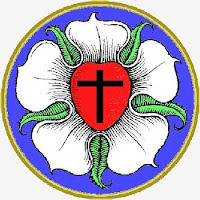 Luther's prince, Elector Frederick III of Saxony, didn't involve himself in crassly selling escape from punishment after death. However, he did have a large collection of religious relics which he would display annually on the Feast of All Saints. People would come to view them, trusting that looking, praying, and leaving an offering would greatly reduce the time they would spend in Purgatory following their deaths.

According to many contemporary sources, Luther took his debate topics to the community's main bulletin board, the doors of Wittenberg's castle church, on All Hallows' Eve and nailed his 95 Theses to them. On the same day, he mailed copies to friends, other universities, the Archbishop of Mainz, and the pope.

Luther apparently intended for the initial discussion to take place within the confines of the Church, especially among trained theologians and academics. Therefore, he wrote them in Latin, the Church's official language of teaching and communication. This intent was thwarted by others — printers sensed a huge story and quickly translated, published, and widely disseminated them so their content soon became also food for the common people's thoughts.

Luther never intended to foster a revolt or to found a new church; both happened because his teaching on salvation was so at odds with the organized church. As noted above, this theological fault line then felt other forces, including nationalism's increasing resistance to foreign popes and emperors. With all these pressures, the fracture between the followers of Luther and those who clung to Roman Catholic dogma widened. The pope excommunicated Luther and the break was complete. He who'd hoped to clean up the mess clinging to his mother church was forced instead to continue his life, studies, and exercises of the Faith in a new, Evangelical confession that later became known as Lutheranism.

The Reformation spread through much of Northern and Western Europe and Evangelical Christianity largely filled Germany and Scandinavia. Subsequent wars and treaties later shifted some of the boundaries. However, the basic division from Luther's day remains in Europe. Following the ejection of the Lutheran party from the Roman Catholic Church, others who disagreed with Rome began their own Reformation movement.

Some joined the Lutherans for a time but later split over doctrine. Later, some of these splintered into still other bodies. England, which was protected by water from threats of force, had a bit of direct Lutheran influence, particularly through Robert Barnes. However, the English Reformation began following other teachings and soon went its own way. Soon, this English (Anglican) Reformation also divided for both doctrinal and political reasons.

Since it began with Luther, and since Lutherans were the original Protestants, we traditionally celebrate the day with more zeal than does any other part of Christendom. Our annual commemorations may carry a strong, positive influence, reminding us of the core reason why it all happened: Martin Luther, convinced that the saving Gospel of Jesus Christ was being obscured by legalism and empty, unchristian ceremonialism, restored the doctrine of justification to its central position. Therefore, gathering to receive and confess salvation by grace through faith in Christ marks such celebrations as good.

However, when we use the the day to bash Catholicism, to boast upon ourselves, to almost worship Luther, or to attack other believers in a mean and petty fashion, we ignore our heritage and risk returning to the legalistic bondage from which the the Reformation brought escape. Also, we misunderstand both the purpose and the methods of the Luther's Reformation if we callously reject and stray from the ancient and good ceremonies and traditions that the reformers kept, just because some think of them as being "too old-fashioned" or "too Catholic." Luther sought no novelty. He wanted to restore the centrality of God's grace in Christ Jesus to the Church rather than radically altering her theology and practice.


Notes on the Illustrations
Regarding what is often called the "Luther Rose," Martin Luther said of the emblem he chose for himself, "I shall ... tell you my original thoughts and reason about why my seal is a symbol of my theology. The first should be a black cross in a heart, which retains its natural color, so that I myself would be reminded that faith in the Crucified saves us. 'For one who believes from the heart will be justified' (Rom. 10:10). Although it is indeed a black cross, which mortifies and which should also cause pain, it leaves the heart in its natural color. It does not corrupt nature, that is, it does not kill but keeps alive. 'The just shall live by faith' (Rom. 1:17) but by faith in the crucified.

"Such a heart should stand in the middle of a white rose, to show that faith gives joy, comfort, and peace. In other words, it places the believer into a white, joyous rose, for this faith does not give peace and joy like the world gives (John 14:27). That is why the rose should be white and not red, for white is the color of the spirits and the angels (cf. Matthew 28:3; John 20:12).

"Such a rose should stand in a sky-blue field, symbolizing that such joy in spirit and faith is a beginning of the heavenly future joy, which begins already, but is grasped in hope, not yet revealed. And around this field is a golden ring, symbolizing that such blessedness in Heaven lasts forever and has no end. Such blessedness is exquisite, beyond all joy and goods, just as gold is the most valuable, most precious and best metal. This is my compendium theoligae [summary of theology]. I have wanted to show it to you in good friendship, hoping for your appreciation. May Christ, our beloved Lord, be with your spirit until the life hereafter. Amen."

The "Reforween" illustration was spurred by a brother pastor in my circuit. He noted that Luther gets the credit for the widespread popularity of the Christmas tree. He figures that with this picture we might also be able to promote a folk belief that he introduced the Halloween jack o' lantern. This could have the collateral benefit of providing our church youth groups with a new source of income, October pumpkin sales.

Almighty and gracious Lord, pour out Your Holy Spirit on Your faithful people. Keep us steadfast in Your grace and truth, protect and deliver us in times of temptation, defend us against all enemies, and grant to Your Church Your saving peace; through Jesus Christ, Your Son, our Lord, who lives and reigns with You and the Holy Spirit, one God, now and forever.