All that we know of Saint Joseph we learn from the first two chapters of Matthew and of Luke. Otherwise he is mentioned only in passing (see Luke 3:23; John 1:45; John 6:42) as the supposed father of Jesus of Nazareth.

Matthew shows Joseph's compassion for his betrothed wife: When the Virgin Mary revealed her pregnancy to him he sought to avoid a public rebuke, which may have resulted in her being stoned. Then after the Lord sent His angel and revealed Himself as the cause of this extraordinary circumstance, Joseph submitted to God's will, just as had his wife. 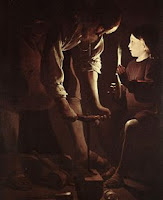 The Heavenly Father thus graciously allowed this unassuming man to bear the responsibility of protecting and providing for the Incarnate Word and the Theotokos. How could Joseph possibly have imagined the extraordinary events that awaited them, including the visits of shepherds and wise men, as well as Herod's wrath and their subsequent flight to Egypt?

Joseph was a pious Jew, a descendant of David, and a carpenter by trade. (The Gospels use the Greek word tekton, which may be translated "builder" or "architect.") Some scholars suggest that he may have been a mason, a metalworker, or a building contractor.

Because of the silence of the Gospels — and because Jesus entrusted Mary to the care of John — it is generally believed that Joseph died a natural death after the visit to Jerusalem when Jesus was twelve (Luke 2:41-51) but before His baptism (Matthew 3:13-17), probably around His thirtieth year. We can only wonder what influence Jesus' earthly father had on Him during His early years on earth.

Almighty God, from the house of Your servant David You raised up Joseph to be the guardian of Your incarnate Son and the husband of His mother, Mary. Grant us grace to follow the example of this faithful workman in heeding Your counsel and obeying Your commands; through Jesus Christ, our Lord, who lives and reigns with You and the Holy Spirit, one God, now and forever.