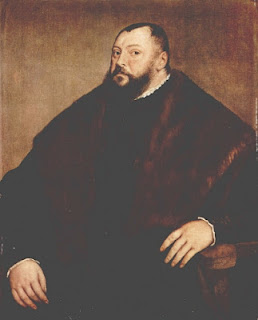 John Frederick (Johann Friedrich), eldest son of John the Steadfast and nephew of Frederick the Wise of Saxony, was born in Torgau on 30 June 1503. He earned the appellation "John the Magnanimous" (der Grossmütige) because of his generous spirit and gracious bearing during trials.

John Frederick studied under George Spalatin and through him became an early supporter of Martin Luther. In 1530, he traveled to the Diet of Augsburg and joined his father in signing the Augsburg Confession. In 1532, he and his half-brother John Ernest (Johann Ernst) succeeded John the Steadfast He became sole Elector of Ernestine Saxony 1542, ruling until 1547.

Impulsive by nature, he lacked the foresight and forbearance of many politicians and he often ignored the wise counsel of Chancellor Brück, who had also worked under his father. Because of his staunch Lutheranism, he couldn't abide Philip of Hesse's desire to extend the Schmalkaldic League to include Swiss and Strasburg reformers. His personal piety also recoiled at Philip's bigamy and he insisted that the League retain a strict Evangelical (Lutheran) theology.

John Frederick set aside the 1541 election of Julius von Pflug to the see of Naumburg-Zeitz, promoting avowed Lutheran Nicholas von Amsdorf in his stead. In 1542, he unilaterally attempted to introduce the Reformation to the city of Wurzen, a city under the joint protection of Electoral and Ducal Saxony. This antagonized Maurice, Duke of Saxony. Only the efforts of Luther and Philip of Hesse were able to avert war between the two Saxonies.

His suspicious nature led him to doubt the efficacy of councils and colloquies and he neglected to attend diets and other meetings where he might have gained support and built alliances.

As Charles V prepared his attack on the Schmalkaldic League, John Frederick was misled and reacted slowly to the Emperor's threat. When the Schmalkaldic War broke out in July 1546, he took his army from Saxony to engage the imperial forces but returned when Maurice, who had joined with Charles V, invaded Electoral Saxony. He was able to repel Maurice and retake most of his lost lands but then suffered defeat at the hands of imperial forces at Mühlberg on 24 April 1547.

Charles V initially condemned him to death for his part in the rebellion against the Holy Roman Empire. However, the sentence was commuted to life in prison when Wittenberg surrendered. Maurice released him in 1552 after he defeated and drove off Charles V. However, his title remained in Maurice's hands.

To the end, John Frederick refused under any circumstances to renounce or compromise his Evangelical understanding of Scripture and his complete adherence to Lutheran doctrine.  ¶ 00:01 |