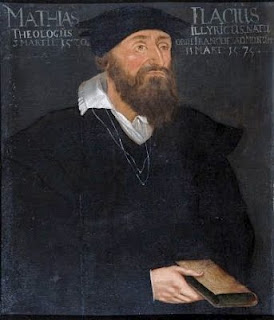 Croatian reformer Matthias Flacius Illyricus (Matija Vlačić Ilirik) was born on 3 March 1520 in Labin (Albona in Latin). At that time, the region was under control of the Venetian Republic. He left home at age 16 to study in Venice. Baldo Lupetina a relative and Franciscan superior on the nearby island of Cres (who was later executed as a heretic) encouraged Matthias to continue studying in Germany.

Flacius traveled to Augsburg, arriving in 1539. He stayed only a short time before moving to Basel, where he enrolled at the university and studied Hebrew and Greek. There he also acquainted himself with many of the day's noted Protestant intellectuals. He moved on to Tübingen to continue his studies.

Traveling on, Flacius headed for the birth place of the Lutheran Reformation. He received his Master's degree from the University of Wittenberg at the age of 24 and lived for most of the 1540s in that town. His degree led to an immediate promotion to professor of theology.

Following Wittenberg, Matthias moved to Magdeburg. Between 1549 and 1557 and under his leadership, this city became a center of opposition to first the Augsburg and then the Leipzig Interims. These were forced truces between the Catholics and the Lutherans and certain other Protestants. During this period, Flacius began openly opposing Philipp Melanchthon and the theological and political compromises he was making with Rome and certain non-Lutheran reformers. Flacius believed that he was a faithful follower of Martin Luther and his theology and saw Melanchthon as one who would destroy much of what Luther had struggled so mightily to obtain. 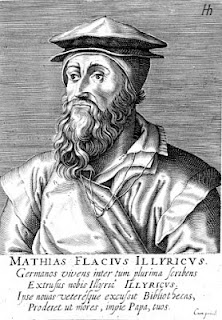 His time in Magdeburg was productive otherwise, as well. While there, he commenced work on on the 13-volume Ecclesiastica Historia (poplularly known as the Magdeburg Centuries) with Johannes Wigand and other scholars. He also wrote numerous tracts and pamphlets on various theological topics.

In 1557, Flacius was invited to head the newly founded theological faculty at the University of Jena. He served in this capacity until the end of 1561, when he was released due to his position in a controversy over original sin. He then moved to Regensburg, living there from 1562-1566. He was unable to achieve two great desires. First, he wanted to open a school for Southern Slavs and also hoped to relocate the Protestant printing press from Urach. Neither happened because Regensburg cancelled his asylum on the orders of Emperor Maximilian II.

At the invitation of the City Senate of Antwerp, Flacius moved there for a brief time, staying long enough to write a confession of faith for the Lutherans of the Low Countries. He was then in Strasbourg from 1567 to 1573. There he completed his final large work, the Glossa compendiaria, a commentary on the New Testament. He died at Frankfurt-am-Main in 1575.

Many would call Matthias Flacius' hermeneutical works his most important achievements and he certainly was a pioneer in the field. His Clavis Scripturae Sacrae (Key to Sacred Scripture) established that any passage of the Bible should be interpreted considering the purpose and the structure of the whole chapter or a given book. It also declared the rule that the literal sense of the text should have a priority over allegories and metaphors. He also contributed much to Church history and dogmatics. As overall proof of his learning and scholarship, we note that Flacius likely owned the single largest private collection of books during the 16th Century. 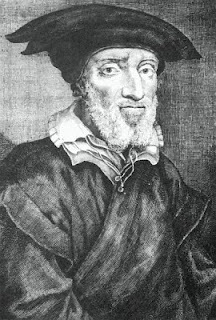 As a theologian Flacius tried to stay loyal to Luther, particularly the Reformer's emphasis on the bondage of the will. Unfortunately, his often abrasive style and his extreme position on original sin alienated many other staunch Lutherans. Because of this, his name fell into neglect and an undeserved degree of disrepute among many confessional Lutherans, even to the present day.

Additionally, he was a Croatian with Italian manners and mannerisms whose German was never good enough for those among whom he worked. In other words, Matthias Flacius Illyricus failed to fit in among his contemporaries in almost every way imaginable. However, we cannot underestimate his influence in preserving, promoting, and expounding the theology of the Lutheran Reformation.

In 1878, biographer Johann Wilhelm Preger eulogized Flacius: "A man of resolute courage, insuperable strength, possessing a wide-ranging knowledge one rarely encounters, with a broad vision and an industrious spirit."

Notes: See the Matthias Flacius Illyricus Memorial Collection for an extensive resource of things Flacius. Magdeburg Press sells How to Understand the Sacred Scriptures, a translated portion of the Clavis Scripturae Sacrae. Illyricus comes from the name of the former Roman province of Illyricum, which included his homeland.  ¶ 00:01 |