The Lord called the Patriarch Abraham (first known as Abram) to become the father of a great nation (Genesis 12). At age 75, in obedience to God's command, he, his wife Sarai (later Sarah), and his nephew Lot moved southwest from the town of Haran to the land of Canaan. There, the Lord cut a covenant with Abram (Genesis 15), promising the land of Canaan to his descendants. In Genesis 17:1-16, the Lord established circumcision as a sign of His covenant people while also renaming Abram as Abraham and Sarai as Sarah.

At the age of 100 Abraham and Sarah were finally blessed with Isaac, the son long promised to them by God. A few years later, Abraham demonstrated supreme obedience when God commanded him to offer Isaac as a burnt offering. God spared the young man's life only at the last moment and provided a ram as a substitute offering (22:1-19).

Despite having his only child born at such an advanced age, Abraham lived to see the births of Isaac's twin sons Jacob and Esau. Abraham finally died at the age of 175 and was buried in the Cave of Machpelah, which he had purchased earlier as a burial site for Sarah. He is especially honored as the first of the three great Old Testament Patriarchs — and for his "righteousness before God through faith. (Romans 4:1-12)" 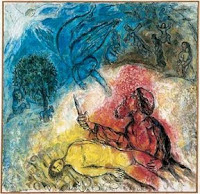 In the great "Faith Chapter" of Hebrews 11, Abraham holds a prominent place. The writer noted several instances where Abraham acted "by faith," contrary to worldly evidence but in accordance with God's will. "By faith," he "obeyed when he was called to go out to a place that he was to receive as an inheritance (v. 8)"; he "went to live in the land of promise ... with Isaac and Jacob (v. 9)"; and he, "when he was tested, offered up Isaac. (v. 17)" Among the believers so listed, God also commended the faith of Sarah, Isaac, and Jacob through the epistle's writer.

The promised blessing of the nations came to fruition in the person of Jesus Christ. He was a son of Abraham by blood, by circumcision, and by His relationship with our heavenly Father. While the Jews traced their descent from Abraham according to his bloodlines, Christians are listed in Scripture as Abraham's true children by faith in Christ. Paul wrote that Abraham is "the father of us all" who share his faith in God (Romans 4:16). In Galatians, Paul also wrote, "Know then that it is those of faith who are the sons of Abraham. And the Scripture, foreseeing that God would justify the Gentiles by faith, preached the gospel beforehand to Abraham, saying, 'In you shall all the nations be blessed.' So then, those who are of faith are blessed along with Abraham, the man of faith. (3:7-9)"

We cannot definitively state that the patriarch saw his greatest Descendant "in the flesh" before he died, although some think that the Son of God was also the Angel of the Lord who spoke with him. However, whether by faith or by sight, we know from Jesus' words that "Abraham rejoiced that he would see my day. He saw it and was glad. (John 8:56)" When the Jews before Him mocked such an apparently outlandish statement, our Lord continued, "Truly, truly, I say to you, before Abraham was, I am, (v. 58)" thereby claiming to be not only a son of Abraham but also Abraham's God (cf. Exodus 3:13-14).

While most people shudder at the thought of Abraham taking Isaac up Mount Moriah as an intended sacrifice, some are more pained by his having a son with Sarai's servant Hagar (see Genesis 16). I'm one of these and, for many of us, it isn't the odd sharing of the marriage bed but the result of this wrong relationship that's more disturbing. Certainly the Lord assured blessing for Hagar's son Ishmael, a child born through human manipulation. However, He reserved the greater blessing for Isaac, the child born to Sarah of His divine promise (Genesis 17:15-21).

Sadly, both blessings were later forsaken by their bearers. The vast majority of Ishmael's descendants do not have Abraham's God as their own but instead have given themselves over to the pernicious religion of Islam and its false god Allah. Meanwhile, much of Israel disappeared, first during the Assyrian invasion and, later, the Babylonian Captivity. Of those who returned to Palestine, many slowly turned away from the God of Abraham, Isaac, and Jacob through the next four hundred years. Then, when appeared the Blessing of the Nations, "He came to his own, and his own people did not receive him. (John 1:11)."