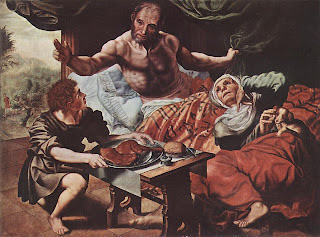 Jacob was the third of the three great Hebrews given the title of patriarch, following his grandfather Abraham and his father Isaac. Jacob was the younger of the twin sons of Isaac and Rebekah.

He received his name because before birth he gripped his brother Esau's heel, seeming even then to be struggling for supremacy (Jacob can mean "He grasps the heel" or "he cheats"). After wrestling with the Angel of the Lord, Jacob, who certainly had lived up to the name of "Deceiver," was renamed Israel, which means "he strives with God" (Genesis 25:26; 32:28).

His family life was filled with trouble, much of it caused by his acts of deception toward his father and his brother Esau and his parental favoritism toward his son Joseph (commemorated on 31 March). He spent many of his later years grieving over the death of his beloved wife Rachel and the presumed death of Joseph, who had been appointed by the Egyptian Pharaoh to be in charge of food distribution during a time of famine in the land.

Late in life, as he was blessing his sons, Jacob uttered God's prophetic promise that the Messiah would come through the line of his fourth son, Judah (Genesis 49:8-12).