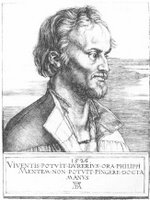 In April of 1530, Emperor Charles V called an official meeting between the representative of Lutheranism and Roman Catholicism, hoping to effect a meeting of minds between two opposing groups. Since Luther was at that time under papal excommunication and an imperial ban, Melanchthon was assigned the duty of being the chief Lutheran representative at this meeting. Thus, he made the primary verbal and written defenses of the Evangelical (Lutheran) position. We especially remembered and honored him as the author of the Augsburg Confession, which was officially presented by the German princes to the emperor on 25 June 1530, as the defining document of Lutheranism within Christendom.

Collect
O Lord God, heavenly Father, pour our Your Holy Spirit on Your faithful people, keep them steadfast in Your grace and truth, protect and comfort them in all temptation, defend them against all enemies of Your Word, and bestow on Christ's Church Militant Your saving peace; through Jesus Christ, Your Son, our Lord, who lives and reigns with You and the Holy Spirit, one God, now and forever.