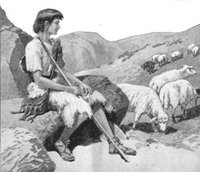 David, the greatest of Israel's kings, ruled from about 1010 to 970 B.C. The events of his life are found from 1 Samuel 16 through 1 Kings 2 and in 1 Chronicles 10-29. Through the prophet Samuel, God called him from tending his father Jesse's flocks to shepherding the people of Israel. David was also gifted musically. He was skilled in playing the lyre and the author of no less than 73 psalms, including the beloved Psalm 23. His public and private character displayed a mixture of good, for example, his defeat of the giant Goliath, (1 Samuel 17) and evil, as in his adultery with Uriah's wife, followed by his murder of Uriah (2 Samuel 11).

David's greatness lay in his fierce loyalty to God as Israel's military and political leader, coupled with his willingness to acknowledge his sins and ask for God's forgiveness (2 Samuel 12 and Psalm 51; Psalm 32 may also have its origins in these sins and his repentance). 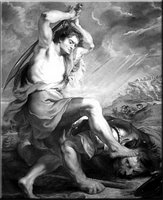 Under David's leadership, the people of Israel were united into a single nation with Jerusalem as its capital city. The Lord made a special promise to David through the prophet Nathan: "Your house and your kingdom shall be made sure forever before me. Your throne shall be established forever. (2 Samuel 7:16)" Isaiah repeated the Lord's promise, focusing on the coming Messiah: "I will place on his shoulder the key of the house of David. (22:22)"

This was central to God's plan of salvation, as evidenced by Matthew 1:1. The evangelist begins the story of Jesus' life, suffering, and death by placing the promise made to David on the same level as a similar, much earlier promise made to Abraham: "The book of the genealogy of Jesus Christ, the son of David, the son of Abraham." Luke 1 shows this twice. Gabriel told Mary, "The Lord God will give to him the throne of his father David. (1:32)" Zechariah prophesied concerning this at the naming of his son John, "Blessed be the Lord God of Israel, for he has visited and redeemed his people and has raised up a horn of salvation for us in the house of his servant David, as he spoke by the mouth of his holy prophets from of old. (1:68-70)" 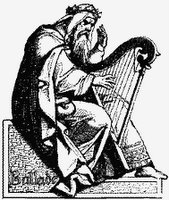 As Paul preached the Gospel, he also carefully maintained the connection between Jesus and David. He told the Roman Christians that he was writing them with the Gospel of Jesus Christ, who "was descended from David according to the flesh (Romans 1:3).

Paralleling the delight the Father had in His Son, Paul beautifully summarized God's delight in David. Preaching in the synagogue in Antioch in Pisidia, he told his hearers how the Lord said, "'I have found in David the son of Jesse a man after my heart, who will do all my will.' (Acts 13:22)"

Dear God, for Jesus' sake grant that each of Your saints likewise be made worthy of this epitaph!

Commemoration taken and expanded from the sanctorial calendar of the upcoming Lutheran Service Book.